In response to the recent school shooting every Florida school will now be forced to post “In God We Trust” signs.

Every Florida school and school administrative building will have to prominently display “In God we trust” under a bill passed by the Florida House.

The House on Wednesday approved the bill on a 97-10 vote.

According to the report, the bill’s sponsor, Rep. Kimberly Daniels, cited the recent shooting at Marjory Stoneman Douglas High School in Parkland, Florida, during her closing speech on the bill:

Daniels said that God is the “light” and “our schools need light in them like never before.”

Seventeen people were killed last week at Marjory Stoneman Douglas High School in Parkland, Florida. No imaginary God stopped the shooter, and any trust placed in that imaginary God is trust misplaced.

Forcing schools to post signs proclaiming “In God We Trust” is a futile gesture that ultimately demeans and disparages the U.S. Constitution, the separation of church and state, and the secular values upon which this nation was built.

Indeed, “In God We Trust” should be replaced with the original motto of the U.S. – “E Pluribus Unum” – Out of many, one.

E Pluribus Unum is a latin phrase meaning “One from many,” also translated as “Out of many, one” or “One out of many.”  It was considered to be the de facto motto of the United States until 1956 when the United States Congress passed an act (H. J. Resolution 396), adopting “In God We Trust” as the official motto.

In fact, “E Pluribus Unum” was the original motto proposed and established by founding fathers John Adams, Benjamin Franklin, and Thomas Jefferson in 1776.

The change to “In God We Trust” was motivated by fear of the Soviet Union and “godless communism” during the height of the Cold War and the “red scare” of the 1950’s. The change was a mistake that violated the First Amendment to the U.S. Constitution and betrayed the secular values upon which the U.S. was founded as well as the explicit intentions of the founding fathers.

As for the Florida legislation, the Associated press reports It’s not clear if the bill will ultimately become law because the Senate has yet to hear the bill.

One brave Florida lawmaker, Rep. Carlos G Smith, strongly condemned the new legislation via Twitter, and for all the rights reasons:

Let’s keep a clear separation between church + state. Forcing our public schools to post “In God We Trust” in a conspicuous place is inappropriate. I don’t care if it was a Democrat who sponsor the bill. I vote based on core values, not party lines. I vote NO on HB 839. #sayfie

(Let’s keep a clear separation between church + state. Forcing our public schools to post “In God We Trust” in a conspicuous place is inappropriate. I don’t care if it was a Democrat who sponsor the bill. I vote based on core values, not party lines. I vote NO on HB 839. #sayfie)

Bottom line: Forcing every Florida school to prominently display “In God We Trust” is a bizarre, pointless, and asinine response to the recent Florida school shooting. 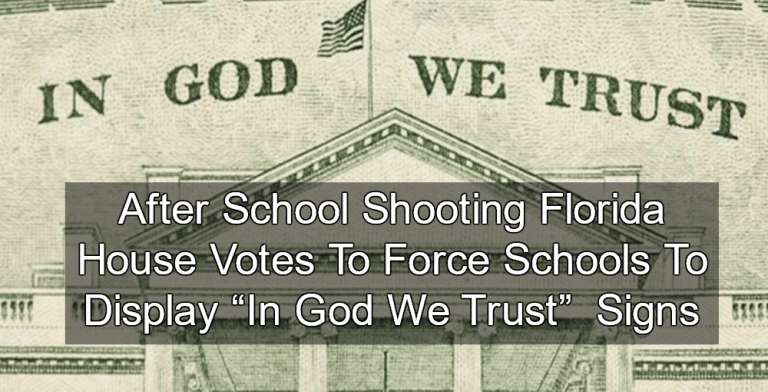 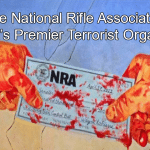