Blame anything but the guns: Kentucky Governor Matt Bevin blames video games, not guns, for the recent Florida school shooting.

After 17 people were killed in a mass shooting at a public high school in Parkland, Florida, the governor of Kentucky wants people to know that violent video games, and not guns, are to blame for the tragedy.

Bevin claims a “culture of death that is being celebrated” via violent video games, TV shows and music is to blame for school shootings.

Bevin explained his dated and discredited theory during a stop in Covington, Kentucky, on Thursday, noting:

We need to have an honest conversation as to what should and should not be allowed in the United States as it relates to the things being put in the hands of our young people.

Bevin continued, and instead of calling out the absurdity of a mentally disturbed teenager being allowed to buy an AR-15 semi-automatic rifle, Bevin turned his attention to violent video games, declaring:

I’m a big believer in the First Amendment and right to free speech, but there are certain things that are so graphic as it relates to violence, and things that are so pornographic on a whole nother front that we allow to pass under the guise of free speech, which arguably are. But there is zero redemptive value. There is zero upside to any of this being in the public domain, let alone in the minds and hands and homes of our young people.

(Note: Whenever someone begins a remark with the preface: “I’m a big believer in the First Amendment and right to free speech, but…” You know immediately that that person does not really respect the First Amendment; in the same way you know that when someone says “Some of my best friends are black, but…” you know that that person is really a racist.)

Go back before any of this (violent video games) existed. How many children walked into other schools and slaughtered other children? What more evidence do you need? The people who say there is no evidence are full of crap.

Let’s be honest: Bevin doesn’t want to have a conversation about school shootings, he wants to rehash a tired and discredited argument about video games that was dismissed by everyone but the most obsessed Christian extremists in 1990’s.

If Bevin really wanted to “start a conversation” about school shootings he would have the courage to address the prominent, and by definition, necessary role that guns play in every school shooting.

However, Bevin, like many Republican politicians, is bought and paid for by the NRA.

This is not the first time Bevin has suggested that video games are responsible for school shootings. Bevin made similar claims after a school shooting in his own state left two students dead and 18 injured at Marshall County High School.

And this is not the first idiotic suggestion from the Kentucky governor. Previously Bevin suggested that prayer is a legitimate strategy for fighting crime, and made plans to establish “prayer patrols” to fight violent crime in the city of Louisville.

And when critics mocked his plan to fight crime with prayer patrols, the deluded Christian extremist threatened his critics with an eternity in Hell. 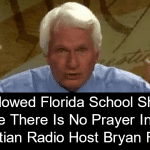 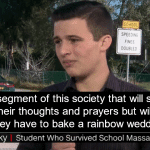 February 16, 2018 Survivor Slams GOP Politicians For Thoughts And Prayers
Recent Comments
0 | Leave a Comment
Browse Our Archives
get the latest from
Nonreligious
Sign up for our newsletter
POPULAR AT PATHEOS Nonreligious
1