In a move meant to fly under the radar, U.S. Attorney General Jeff Sessions, under the guidance of the Trump administration, made significant changes to the policy manuals for U.S. Attorneys’ offices and Department of Justice litigation offices.

To the greatest extent practicable and permitted by law, Department components and United States Attorneys’ Offices must reasonably accommodate religious observance and practice in all activities, including litigation. See 82 Fed Reg. 49668.  As set forth below, the Office of the Associate Attorney General has supervisory responsibility for overseeing the Department’s respect for religious liberty in litigation.

Each litigating division should select a member of its front office and each United States Attorney’s Office should assign its Civil Chief, or his/her designee, to coordinate religious liberty litigation issues and to implement this section.

… the Trump administration is favoring religious beliefs above all other matters, and is eroding the independence of these offices by allowing a political appointee to overrule the judgment of career DOJ attorneys.

This is a breathtaking expansion of religious privilege in the DOJ. These policy changes significantly undermine the rule of law and favor religious beliefs at the expense of nondiscrimination and equal protection.

Requiring the approval of religious political appointees before enforcing the law is something I would expect to see in a theocracy like Iran or Saudi Arabia, but I’m rapidly losing any sense of shock and surprise at the lengths this administration will go to impose the beliefs of religious extremists on all Americans.

The latest policy changes for U.S. Attorneys’ offices and Department of Justice litigation offices reflects a pattern of promoting and protecting religious extremism by the Trump administration.

Last month the Trump administration announced a new unit of the federal government: the conscience and religious freedom division of the office for civil rights at the Department of Health and Human Services.

According to reports, the new division within the Department of Health and Human Services will be devoted to “conscience and religious freedom.”

Translation: the new Religious Freedom Gestapo will protect conservative Christians in the medical profession who refuse to do their job for religious reasons. The new office will protect those who choose to discriminate against women, LGBT people, and any others who offend their religious sensibilities.

Bottom line: Under guidance from the Trump administration, U.S. Attorney General Jeff Sessions is quietly installing “religious freedom” czars in every U.S. Attorney’s office. And the country continues to march towards a Christian theocracy. 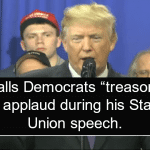 February 5, 2018
Trump Accuses Democrats Of Treason For Failing To Applaud Speech
Next Post 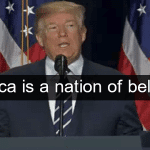 February 8, 2018 Trump Promotes Christian Nationalism At National Prayer Breakfast
Recent Comments
0 | Leave a Comment
Browse Our Archives
get the latest from
Progressive Secular Humanist
Sign up for our newsletter
POPULAR AT PATHEOS Nonreligious
1