And they call it Christian love: Many conservative Christians are taking pleasure in the false idea that Stephen Hawking is burning in Hell.

In a deplorable but not surprising development, many religious conservatives are claiming that Stephen Hawking is burning in Hell after the legendary British theoretical physicist and intellectual giant died peacefully at his home in Cambridge, England, at age 76.

Hawking, an outspoken atheist, is being attacked and maligned on social media by many religious conservatives threatened and offended by the implication of the scientific truths Hawking shared with the world.

Stephen Hawking is burning in Hell. Funny, his final thoughts were that he was going to enter eternal darkness. But when he woke up, he found himself before the Lord, his soul judged by him to be tortured for all eternity in the realm of Satan. pic.twitter.com/5lbPVAn0o7

Stephen Hawking gonna pull up to Hell and Satan gonna be waiting for him like pic.twitter.com/zAx7iNlryh

“Stephen Hawking” another ugly face sick maniac passed away, for the world to be prettier. I don’t care and RIH (rest in hell)

When you encounter someone who says he doesn’t believe in God, remember that you’re dealing with a foolish, corrupt, and abominable person. #stephanhawking #atheist

Stephen hawking is burning in hell right now bet he’s not an atheist anymore ! The FOOL hath said in his heart, there is no God

Sadly, Stephen Hawking is now burning in a fiery hell according to his own testimony.

John 3:16-17
For God so loved the world, that he gave his only begotten Son, that whosoever believeth in him should not perish, but have everlasting life.
~BIBLE

It’s sad Stephen Hawking is in hell because he was a scientist but it’s not for me to understand!

Bottom line: Stephen Hawking is not in heaven, nor is he in hell. He is simply dead. Full stop.

There is no heaven, and there is no hell. Death is final, and that is tragedy enough. There is no afterlife. All we can do now is mourn the loss, and celebrate the life.

In the end, the fact that many conservative Christians are taking pleasure in the false idea that Stephen Hawking is burning in Hell only demonstrates the poverty of their intellect, their character, and their religious superstition. 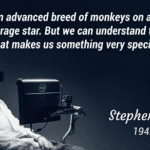 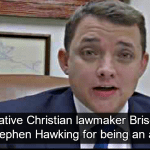 March 14, 2018 Texas Lawmaker Mocks Stephen Hawking For Being An Atheist
Recent Comments
0 | Leave a Comment
"It is tempting sometimes to give them what they deserve, but actually persecuting them would ..."
Juniper Pentecostal Christians Are Burning Australia’s Sacred ..."
"Tippling Philosopher is widely regarded as perhaps the best Patheos non religious blogs."
Geoff Benson Fox News Host Bill Hemmer Warns ..."
"Reminds me of condemnations of rock-&-roll by Southern Baptists (& other like-minded fundies) back in ..."
Georgia Sam Pentecostal Christians Are Burning Australia’s Sacred ..."
"I am called a bigot, a fool, referred to as "my kind", "nigerian white supremacist ..."
MrPeach Texas Governor: ‘The Problem is Not ..."
Browse Our Archives
get the latest from
Progressive Secular Humanist
Sign up for our newsletter
POPULAR AT PATHEOS Nonreligious
1