A bill that would protect children from child marriage has been killed after objections from conservative Christians worried that the new law protecting children would damage their efforts in opposing gay marriage.

State House Republicans in Tennessee on Wednesday effectively killed a bill to ban child marriages in an effort to bolster a conservative lawyer’s case against the Supreme Court decision on same-sex marriage.

In essence, conservative Christians in the state are “arguing that the Supreme Court’s ruling essentially nullified all Tennessee marriage licenses when it opened the spectrum of legal marriage beyond just between a man and a woman.”

According to this theory, “if Tennessee were to ban child marriages by modifying state marriage law, lawmakers would be acknowledging the existence of same-sex marriage.”

In other words, conservative Christians in the state are saying “to hell with the children, we need to stop gay marriage at all costs.”

The bill, sponsored by Rep. Darren Jernigan, a Democrat, would simply prohibit marriages where one of the parties is under 18 years of age.

Adding insult to injury, according to reports, the Nonprofit group Unchained at Last says it has found at least three marriages in Tennessee involving a child as young as 10 years old.

Times Free Press reports the bill was killed by House Majority Leader Glen Casada, who “acted at the request of former state Sen. David Fowler, R-Signal Mountain, an attorney who is now head of the Family Action Council of Tennessee.”

The Family Action Council of Tennessee is a powerful conservative Christian group that apparently has no problem with child marriage, but does object to same-sex marriage.

Basically, what has happened is the Family Action Council wants to continue to let 13-year-olds get married in the state at the sake of their court case against same-sex couples. It’s disgraceful. I’m embarrassed for the State of Tennessee, and I can only pray that we bring this back next year and not let them get in the way.

Bottom line: Tennessee Republicans, facing pressure from a powerful conservative Christian lobby, refuse to protect children as young as 13 from being forced into marriage. 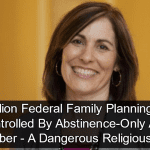 March 7, 2018
Trump Administration Goes All In For Abstinence-Only Sex Education
Next Post 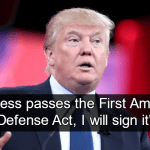 March 8, 2018 GOP Senators Promote Christian Theocracy With First Amendment Defense Act
Recent Comments
0 | Leave a Comment
Browse Our Archives
get the latest from
Nonreligious
Sign up for our newsletter
POPULAR AT PATHEOS Nonreligious
1