Wisconsin Sub Brags About Preaching While Teaching At Public School

Wisconsin substitute teacher Jason Storms brags about abusing his authority as a teacher by preaching to public school students.

In a deplorable display of arrogance and contempt for both public education and his students, Jason Storms, a clearly unqualified substitute teacher from Wisconsin, brags about being paid by the state while preaching to captive public school students, in a gross and despicable abuse of his authority.

I got to share my testimony and preach boldly to hundreds of students for hours, while the state paid me. The principal told me she heard nothing but positive things. The fun thing about substitute teaching is it is very flexible. I can go in as much or as little as I want, hope to be able to do this at least a couple times a month. #PreachTheGospel #MakeDisciples 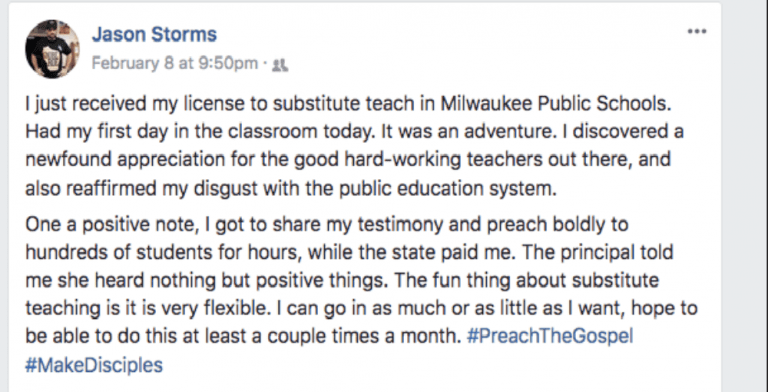 It is well settled that public schools may not advance or promote religion. Since Storms admitted to “boldly” proselytizing to students on taxpayer time rather than teaching the appropriate secular curriculum, FFRF is requesting that he not teach in Milwaukee Public Schools again. FFRF is also asking that in the future all new substitute teachers at the school district will be clearly informed that they are not permitted to promote religion while acting in their official capacity as Milwaukee Public Schools teachers.

It is unconstitutional and completely inappropriate for a public school teacher, even a substitute, to ‘share [his religious] testimony,’ ‘preach the gospel,’ or seek to ‘make disciples’ in the classroom. Parents expect that public school teachers will act in accordance with the Constitution and refrain from proselytizing students.

FFRF is asking that in the future Milwaukee Public Schools inform all substitute teachers “of their constitutional obligations under the First Amendment,” while also declaring that Storms is unfit and unqualified to work in the public school setting:

.. his bragging about preaching to students “for hours, while the state paid [him],” and his open “disgust with the public education system,” demonstrate that he is not suited to be a Milwaukee Public Schools substitute teacher.

A formal apology to the parents and affected students is warranted by Milwaukee Public Schools. Parental trust was betrayed, and the students’ rights of conscience was brazenly violated.

In short, Storms is at once both a deeply flawed human being and an incompetent and dangerous educator. His open contempt and disrespect for the rights of his students is despicable, and demonstrates a profound lack of both character and temperament.

Bottom line: This man is a dangerous religious extremist and has no business working in any capacity at any public school. 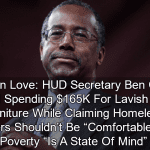 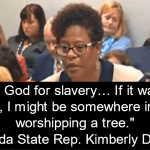 March 1, 2018 Black Florida Lawmaker Thanks God For Slavery
Recent Comments
0 | Leave a Comment
Browse Our Archives
get the latest from
Nonreligious
Sign up for our newsletter
POPULAR AT PATHEOS Nonreligious
1