Get Ready For Jesus: The Rapture Is April 23

Biblical prophecy predicts the Rapture is April 23: Christians look forward to the end of the world, when they will rise in the sky and meet Jesus.

Fox News reports the end of the world is April 23, according to prominent Christian numerologist David Meade:

For a certain branch of evangelical Christianity, Revelation 12:1–2 describes the beginning of what is known as the Rapture and the second coming of Christ.

The passage reads: “And a great sign appeared in heaven: a woman clothed with the sun, with the moon under her feet, and on her head a crown of 12 stars. She was pregnant and was crying out in birth pains and the agony of giving birth.”

In the passage, the woman is represented as Virgo.

According to Meade, the alignment represents “the Lion of the tribe of Judah,” marking the Rapture, the belief that Christ will bring the faithful into paradise prior to a period of tribulation on earth that precedes the end of time.

During this time frame, on April 23, 2018 the moon appears under the feet of the Constellation Virgo.

The Sun appears to precisely clothe Virgo… Jupiter is birthed on April 08, 2018.

The 12 stars at that date include the nine stars of Leo, and the three planetary alignments of Mercury, Venus and Mars – which combine to make a count of 12 stars on the head of Virgo.

Thus the constellations Virgo, Leo and Serpens-Ophiuchus represent a unique once-in-a-century sign exactly as depicted in the 12th chapter of Revelation. This is our time marker.

According to the “Christian numerologist”  Planet X, also known as Nibiru, will appear above the sky on the April 23, causing volcanic eruptions, tsunamis and earthquakes.

However, NASA has repeatedly pointed out that Planet X, also known as Nibiru, is a hoax. Commenting on the Rapture story, Space.com reports:

What planet is responsible for this alignment? It’s Nibiru, a mythical world supposedly orbiting the sun in an extremely long, eccentric orbit that has been debunked again and again by NASA — but it somehow keeps popping up in forecasts of doom. In the latest prediction, Nibiru is supposed to pass by Earth this October, causing volcanic eruptions as the gravity of this massive world disturbs our own.

Nibiru has been implicated in all sorts of planetary trouble, going back as far as 1995, when there were nasty predictions that it would collide with Earth. NASA, however, reassured us a few years ago that “No giant, rogue planet has been found in the outer solar system to play the role of Nibiru.”

Bottom line: Some Christians believe April 23 will be the Rapture, a day when the world ends and the chosen will rise in the sky and meet Jesus. 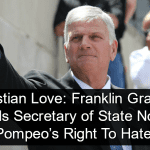 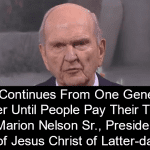 April 18, 2018 Top Mormon Leader Tells Africans Tithing Will End Cycle Of Poverty
Recent Comments
0 | Leave a Comment
"Tippling Philosopher is widely regarded as perhaps the best Patheos non religious blogs."
Geoff Benson Fox News Host Bill Hemmer Warns ..."
"Reminds me of condemnations of rock-&-roll by Southern Baptists (& other like-minded fundies) back in ..."
Georgia Sam Pentecostal Christians Are Burning Australia’s Sacred ..."
"I am called a bigot, a fool, referred to as "my kind", "nigerian white supremacist ..."
MrPeach Texas Governor: ‘The Problem is Not ..."
"you sure can run your mouth here, now explain your downvote to my harmless comment. ..."
Joshua Booker Million MAGA March: Militias, Proud Boys, ..."
Browse Our Archives
get the latest from
Progressive Secular Humanist
Sign up for our newsletter
POPULAR AT PATHEOS Nonreligious
1