Prominent Southern Baptist leader tells women they should never seek a divorce, not even if they’re being beaten and abused by their husband.

In a recently released tape first reported on by the Texas Statesman, Patterson was asked what he recommends for women “who are undergoing genuine physical abuse from their husbands, and the husband says they should submit.”

It depends on the level of abuse to some degree. I have never in my ministry counseled that anybody seek a divorce, and I do think that’s always wrong counsel. There have been, however, an occasion or two when the level of the abuse was serious enough, dangerous enough, immoral enough that I have counseled temporary separation and the seeking of help. I would urge you to understand that that should happen only in the most serious of cases. . . More often, when you face abuse, it is of a less serious variety.

Later in the tape Patterson says he would give this advice to women being abused by their husbands:

That’s right, Patterson’s advice to a woman being beaten and physically abused by her husband is “to be submissive” and to “elevate” her abuser.

As one might imagine, the leaked tape has set off a firestorm of criticism, including fierce criticism from some prominent conservative Christian women. For example:

One of the many things that disturbs me about this is the way Patterson puts ALL the responsibility on the woman to change her husband—while he’s beating her. Even if you hate divorce, this is a gross abdication of pastoral and legal responsibility. https://t.co/AbMmBQcA66

I’m pro marriage. Nearly 40 years of ups and downs to back that up. But when we as a church culture demonize divorce as the worst possible outcome – the sin of all sins – we truly have no clue on this ever loving earth what some people are enduring. We do not submit to abuse. NO.

However, Patterson is not backing down. In a statement released Sunday, Patterson doubled-down on his deadly advice, while claiming that he is being persecuted and misrepresented, and denying that he himself has ever abused a woman. The following is a brief excerpt from that statement:

For the record, I have never been abusive to any woman…

I have also said that I have never recommended or prescribed divorce. How could I as a minister of the Gospel? The Bible makes clear the way in which God views divorce.

I do not apologize for my stand for the family and for seeking to mend a marriage through forgiveness rather than divorce.

Bottom line: Prominent Southern Baptist leader Paige Patterson tells women being abused by their husbands that divorce is not an option, and that they should “stay and pray,” because “the Bible makes clear the way in which God views divorce.” 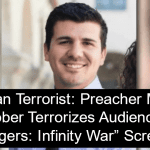 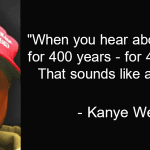 May 1, 2018 Kanye West Embraces Trump, Claims Slavery Was A Choice
Recent Comments
0 | Leave a Comment
Browse Our Archives
Follow Us!