Can a black man be a white supremacist? Kanye West loves Trump, and claims slavery was a choice.

In a bizarre interview with TMZ, an intellectually unhinged Kanye West went on a bizarre rant, trying to justify his support for Trump, while claiming that being a slave was actually a choice.

In the interview West said:

West then asked the entire newsroom if he was “thinking free”:

TMZ’s Van Lathan, a sports writer and podcast host, responded to West with his own well justified rant:

I think what you’re doing right now is actually the absence of thought and the reason. Why I feel like that is because, Kanye, you’re entitled to your opinion, you’re entitled to believe whatever you want, but there is fact and real world, and real life consequence behind everything you just said.

And while you are making music and being an artist and living the life that you’ve earned by being a genius, the rest of us in society have to deal with these threats to our lives. We have to deal with the marginalization that has come from the 400 years of slavery that you said for our people was a choice.

Frankly, I’m disappointed, I’m appalled, and brother—I am unbelievably hurt by the fact that you have morphed into something to me that isn’t real.

Lathan is right. West’s remarks concerning slavery, and his support of Trump, is at once both disappointing and appalling.

The remarks are also profoundly ignorant. 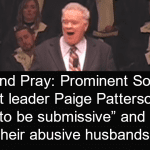 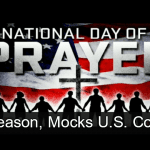 May 2, 2018 National Day Of Prayer Insults Reason, Mocks U.S. Constitution
Recent Comments
0 | Leave a Comment
"My feeling exactly! It's people like "Cardinal" Burke who give humanity a bad name."
Jason Cardinal Raymond Burke: God Says Gays ..."
"Even if such a creator had such a plan, that plan would still be wrong ..."
Carstonio Cardinal Raymond Burke: God Says Gays ..."
"He shovels it enough."
skinnercitycyclist Trump Pastor: If Biden Wins People ..."
"You may well be right. But I've always been a foolish optimist -- a glass-half-full ..."
red-diaper-baby 1942 GOP Senate Candidate Jason Lewis Is ..."
Browse Our Archives
get the latest from
Progressive Secular Humanist
Sign up for our newsletter
POPULAR AT PATHEOS Nonreligious
1