After a Dallas restaurant went viral for pledging to support “reasonable and effective gun regulations” the official NRA twitter account sent out a dog whistle tweet to their rabid membership with terrifying consequences.

Attn @AnnualMeetings attendees. Steer clear of Ellen’s in downtown Dallas! Why go there when there are so many other great choices. #sorrynotsorry #StandAndFight #DefendTheSecond pic.twitter.com/joX7pPoPm4

A popular Dallas restaurant received threats of shootings after the National Rifle Association tweeted for its supporters to “steer clear” of the eatery because it put a message advocating gun regulation on its receipts during an NRA convention.

We’ve had people calling and say they’re going to shoot the place up, one that implied he would be burning us down today. Ridiculous people.

The Hill, reporting on the death threats, notes:

The threats apparently came in response to the NRA telling its members to “steer clear” of the restaurant, because it had printed a message on the bottom of its receipts saying that a portion of the week’s proceeds would be donated to gun-control advocacy groups.

Make no mistake, the NRA is a deplorable domestic terrorist organization that hides behind the Second Amendment while representing the interests of a very small, but vocal and threatening minority.

Currently there is a move to designate the NRA a domestic terrorist organization. The online petition, “Designate the National Rifle Association (NRA) as a Domestic Terrorist Organization under the USA Patriot Act,” states:

The National Rifle Association has pursued a radical agenda of facilitating and promoting the uninhibited distribution of firearms intended for mass slaughter of Americans.

They have colluded with the manufacturers and dealers of these dangerous weapons of mass annihilation to prevent any regulatory control over the qualification of purchasers or the lethality of the weapon.

They have implemented a sophisticated system of political bribery and extortion using campaign funding and Political Action Committees that pervert the political process, and result in representatives acting against the expressed interests of their constituents.

Through their positions and actions, the NRA fulfills all of the requirements for designation as a domestic terrorist organization. Their actions are responsible for 18 school shootings in 2018 alone, as well as thousands of gun-related deaths over the last decade.

In other words, the NRA is a deadly and powerful terrorist organization. Death and Taxes reports:

Yet despite the relatively small numbers, the NRA terrorizes politicians and civilians alike. The death threats sent to Ellen’s in Dallas is just one example of the terror and mayhem caused by deranged NRA members.

As a nation we live with and tolerate a culture of gun violence. All the while any proposal to enact sensible reform to curb gun violence is squashed by the the NRA. Indeed, the NRA intimidates and bullies politicians and others, like the people at Ellen’s, while spreading deception and misinformation to the general public. They are the equivalent of the 20th century tobacco lobby, merchants of death, terrorists claiming their product is safe while countless Americans die.

Bottom line: The NRA is America’s premier terrorist organization, and they need to be stopped. 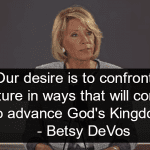 May 4, 2018
Report: DeVos Wants To ‘Redefine’ Private Schools As Part Of Public Education
Next Post 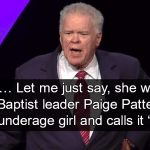