Texas Lawmaker: Thoughts And Prayers Are Not Working

Texas Lawmaker: Thoughts And Prayers Are Not Working May 18, 2018 Michael Stone

Texas lawmaker Gene Wu says thoughts and prayers are not enough after a tragic school shooting in Texas.

After ten people were killed and ten others injured at Santa Fe High School, Texas State Rep. Gene Wu, a Democrat, wrote a simple yet elegant and powerful tweet calling for change.

Y’all been sending thoughts and prayers for two freaking decades now. Time to try something new.

(Y’all been sending thoughts and prayers for two freaking decades now. Time to try something new.)

Wu is right. And the fact is many well-meaning people are offering “thoughts and prayers” after this tragic, but sadly predictable gun massacre.

For example, The Texas Tribune reports:

U.S. Sen. John Cornyn, along with many of the state’s other Republican political leaders, sent his “thoughts and prayers” to the families of those injured and killed…

Prayers are spiritual masturtbaton: they might make the person doing the praying feel a little better, but prayers do nothing to effect change in the real world.

Evidence collected over many years, obtained from many locations, indicates that the power of Prayer is insufficient to stop bullets from killing school children.

(Evidence collected over many years, obtained from many locations, indicates that the power of Prayer is insufficient to stop bullets from killing school children)

Tyson is right. Prayers are insufficient.

And ten people are dead, and ten more are injured, after yet another school shooting, this time in Texas.

Bottom line: Cheers for Rep. Gene Wu, a Texas lawmaker with the courage to state the obvious: thoughts and prayers are not working – it’s time to try something new. 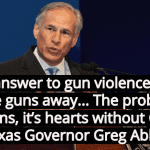 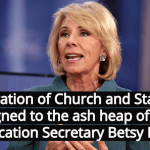