Powell recently appeared on the Skylar Fiction Show to explain his conservative Christian views. Once the program begins Powell immediately suggests that gays should be executed by the government just as the Bible dictates, declaring:

… as far as homosexuality goes, you know, I believe the Bible puts the death penalty on it.

I believe it’s disgusting. And incidentally, every scientific test has come back and said that homosexuals are 50 more times likely to get AIDS… we got this AIDS thing spreading… it’s a fact that this is the case.

A skeptical Skylar Fiction first rejected Powell’s false claim concerning AIDS, and then asked if Powell was trolling him, noting that his views were so extreme they resembled “the Westboro Baptist Church.”

You don’t believe that gay people should be stoned to death, do you?

At that point Fiction asked:

Is that what you’re advocating for? That our government should stone gays to death to execute them?

By whatever means they execute people. And obviously, I believe in humane, you know, putting to death

Fiction then noted that execution is never “humane.”

Indeed, calling for LGBT people to be put to death is a message that is frequently heard in small, and not so small, Christian congregations across the country, and around the world.

Recently a Christian pastor in Arizona made a public call for gays and lesbians to be stoned to death, while openly expressing anger and disappointment that other Christian pastors were not following God’s commandment to “kill the gays.”

In another case, the senior pastor for a megachurch in Tennessee, Brainerd Baptist Church Senior Pastor Robby Gallaty, made headlines after telling his huge congregation that “gays must be put to death” because God commands it.

Claiming that being gay is a choice like drug abuse, Pastor Gallaty told his large congregation that Christians should never stop discriminating against homosexuals, arguing that gays could choose to be straight if they only accepted Jesus Christ as their Lord and Savior.

Gallaty explained why gays should be put to death, using the same logic, and the same Biblical reference, Pastor Lee and others use:

God said that the sins of the people had infected the very land in which they live. So what happens to people who engage in this activity, this sexual immoral activity? Go to Leviticus 20, God gives us the punishment for engaging in these sins… ‘If a man sleeps with a man as with a woman, they have both committed a detestable thing. They must be put to death. And their blood is on their own hands.’

Clergy are not the only ones who promote extreme anti-gay prejudice in the name of Jesus. In a particularly egregious example, a Republican candidate for Oklahoma’s state house of representatives also argued that LGBT people be put to death, and also used the Bible as a justification.

Bottom line: A new generation of Christian fundamentalists are continuing the old argument that the government should start executing gays, because that’s what Jesus would want. 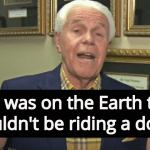 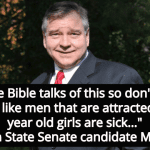 June 1, 2018 GOP Candidate Normalizes Pedophilia Because The Bible
Recent Comments
0 | Leave a Comment
Browse Our Archives
get the latest from
Progressive Secular Humanist
Sign up for our newsletter
POPULAR AT PATHEOS Nonreligious
1