Christianity has always been an excuse for cruelty and ignorance. The fact that so-many Christians support Donald Trump and his deplorable concentration camps for immigrant children only reinforces this notion.

Reporting on the crisis for MSNBC’s Morning Joe, Ruhle said that  evangelicals “stand with the president because they believe his ideology supports their overall values.”

Defending the deplorable practice, Pastor Bill Sutton of Trinity Baptist in McAllen, Texas, explained to Ruhle that Trump is a minister of God for the righteous. Sutton said:

Blind faith is how you have to trust the Lord.

But the Lord and elected officials are two different things.

But they are ministers of God for the righteous. I don’t believe any person is in any office that God has not allowed it to be there.

I’ve kind of put my trust somewhere. I can’t solve it and so I’m trying to believe that the government will do that which is right because they are ministers of God for righteousness sake.

It’s the parents, the parents who bring their children to the border to violate the law.

Bottom line: Many “pro-life” pastors are supporting Trump’s cruel and inhumane policy of separating immigrant children from their parents. 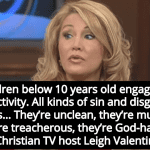 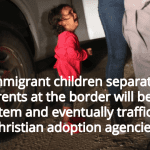 June 20, 2018 Report: Concentration Camp Kids Will Be Trafficked Via Christian Adoption Agencies
Recent Comments
0 | Leave a Comment
Browse Our Archives
get the latest from
Progressive Secular Humanist
Sign up for our newsletter
POPULAR AT PATHEOS Nonreligious
1