A new book, The Christian Destruction of the Classical World, by Catherine Nixey, offers a fresh look at the early Christian church that paints an unflattering and disturbing picture. Indeed, Nixey shows that early Christians resemble the notorious Islamic State in their destruction of important cultural artifacts and libraries in the classical world, and their violent opposition to church critics. .

Nixey makes the fundamental point that while we lionize Christian culture for preserving works of learning, sponsoring exquisite art and adhering to an ethos of “love thy neighbor,” the early church was in fact a master of anti-intellectualism, iconoclasm and mortal prejudice.

Christians became known as those “who move that which should not be moved.” Their laudable appeal to have-nots at the bottom of the pile, both free and unfree, meant that bishops had a citizen-army of pumped-up, undereducated young men ready to rid the world of sin. Enter the parabalini, sometime stretcher-bearers, sometime assassins, who viciously flayed alive the brilliant Alexandrian mathematician and pagan philosopher Hypatia. Or the circumcellions (feared even by other Christians), who invented a kind of chemical weapon using caustic lime soda and vinegar so they could carry out acid attacks on priests who didn’t share their beliefs.

In fact, The Christian Destruction of the Classical World offers:

A bold new history of the rise of Christianity, showing how its radical followers ravaged vast swathes of classical culture, plunging the world into an era of dogma and intellectual darkness

More about The Christian Destruction of the Classical World:

In Harran, the locals refused to convert. They were dismembered, their limbs hung along the town’s main street. In Alexandria, zealots pulled the elderly philosopher-mathematician Hypatia from her chariot and flayed her to death with shards of broken pottery. Not long before, their fellow Christians had invaded the city’s greatest temple and razed it—smashing its world-famous statues and destroying all that was left of Alexandria’s Great Library.

As Catherine Nixey reveals, evidence of early Christians’ campaign of terror has been hiding in plain sight: in the palimpsests and shattered statues proudly displayed in churches and museums the world over. In The Darkening Age, Nixey resurrects this lost history, offering a wrenching account of the rise of Christianity and its terrible cost.

In short, Nixey argues Christianity caused the “Dark Ages” by systematically destroying the classical world. Driven by a hatred of science, Christians burned down the Great Library of Alexandria, and they brutally murdered the revered philosopher and scientist Hypatia of Alexandria.

Bottom line: In The Christian Destruction of the Classical World, Catherine Nixey exposes and explains the deplorable behavior of early Christians, and their wanton destruction of the classical world, plunging Western civilization into a thousand-year-long decline. 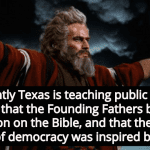 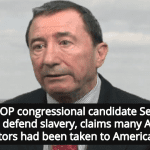 June 13, 2018 New Jersey GOP Congressional Candidate Defends Slavery
Recent Comments
0 | Leave a Comment
Browse Our Archives
get the latest from
Nonreligious
Sign up for our newsletter
POPULAR AT PATHEOS Nonreligious
1