End Times broadcaster and radical conspiracy theorist Rick Wiles used his “TruNews” television program last night to warn that MSNBC’s Rachel Maddow had signaled that a violent coup will take place within the next 72 hours during which President Trump and his family will be dragged out of the White House and beheaded.

On his program Wiles lamented the fact that “people like Maddow and CNN’s Anderson Cooper on television is evidence that America has been ‘homosexualized’ and is ‘no longer a Christian nation.’”

Speaking on the TruNews network, Wiles, commenting on a recent Maddow segment in which the MSNBC host argued that the U.S. must prepare for “the worst case scenario that Trump is compromised by Russia,” declared: 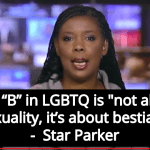 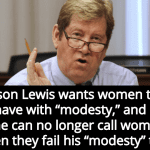 July 19, 2018 GOP Congressman Is Sad He Can’t Call Women ‘Sluts’ Anymore
Recent Comments
0 | Leave a Comment
"Accept or don't accept the sites I provided. That is your choice. Christian sites are ..."
Mark Bradshaw Ana Kasparian’s Glorious Rant On Christianity ..."
"Any chance you could reference an actual scholarly site, I am not about to accept ..."
Kit Hadley-Day Ana Kasparian’s Glorious Rant On Christianity ..."
"Ohhh the scary "they". And who, exactly, are "they"? Wait, let me guess, it's the ..."
alverant Fox News Host Bill Hemmer Warns ..."
""Yes it does" ----- NO, it does NOT. In NO place in the Bible does ..."
Mark Bradshaw Ana Kasparian’s Glorious Rant On Christianity ..."
Browse Our Archives
get the latest from
Progressive Secular Humanist
Sign up for our newsletter
POPULAR AT PATHEOS Nonreligious
1