New grand jury report reveals the Catholic Church has a seven step playbook they use to conceal the truth about priests raping children.

But now a new grand jury report released by the Pennsylvania Supreme Court explains the policy and procedures the Catholic Church uses to cover-up, deny, and obfuscate the epidemic of sexual abuse and rape of children by Catholic clergy.

The Los Angeles Times reports on the Catholic Church’s seven step playbook for concealing the truth about priests raping and sexually abusing children. The seven steps in the “playbook” are:

2) use fellow clergy to conduct investigations

4) decline to say why abusive priests were removed

7) avoid reporting the priests to the police

The revelation that the Catholic Church has an official playbook they use to discredit and essentially re-victimize the victims of rape and sexual assault at the hands of Catholic clergy is appalling, but it is only one part of the horrific grand jury report detailing more than a thousand instances of sexual abuse allegedly committed by hundreds of priests in Pennsylvania.

And, of course, it is important to note that the rape and sexual abuse of children in the Catholic Church is not unique to Pennsylvania. In fact, wherever there is a Catholic Church one can be certain there is at least one predatory priest that has been raping and sexually assaulting children, and many other clergy members willing to cover-up the abuse, always more concerned with protecting the tattered reputation of the corrupt church then the welfare of the children raped and abused by their colleagues.

Indeed, the grand jury report makes it clear that every level of Catholic leadership is complicit in the cover-up, ultimately protecting and enabling predatory priests:

Priests were raping little boys and girls, and the men of God who were responsible for them not only did nothing; they hid it all. For decades. Monsignors, auxiliary bishops, bishops, archbishops, cardinals have mostly been protected; many, including some named in this report, have been promoted. Until that changes, we think it is too early to close the book on the Catholic Church sex scandal.

Bottom line: The Catholic Church uses a seven step playbook for concealing the truth about priests raping and sexually abusing children. The playbook is an orchestrated and well thought out method to conceal the truth about priests raping children, and serves as further confirmation that the Catholic Church is a morally corrupt institution that victimizes and re-victimizes innocent children in the vain attempt to protect it’s tattered and dirty reputation. 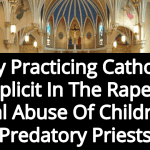 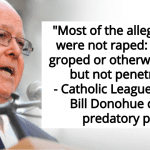 August 16, 2018 Catholic League On Predatory Priests: It’s Not Rape If The Child Isn’t Penetrated
Recent Comments
0 | Leave a Comment
"I am called a bigot, a fool, referred to as "my kind", "nigerian white supremacist ..."
MrPeach Texas Governor: ‘The Problem is Not ..."
"you sure can run your mouth here, now explain your downvote to my harmless comment. ..."
Joshua Booker Million MAGA March: Militias, Proud Boys, ..."
"now I see why you hide your name. Some TROLL in ya=== lol!"
Brian Carnevale Texas Governor: ‘The Problem is Not ..."
"The cowardly censor at FA banned me years ago.There was an uncensored Angry Atheist channel, ..."
Pablo.Dali Fox News Host Bill Hemmer Warns ..."
Browse Our Archives
get the latest from
Progressive Secular Humanist
Sign up for our newsletter
POPULAR AT PATHEOS Nonreligious
1