Catholic League On Predatory Priests: It’s Not Rape If The Child Isn’t Penetrated

In a bizarre, insensitive, and outrageous post, Bill Donohue, president of the very conservative Catholic League, attacked the recent grand jury report documenting the rape and sexual abuse of over a 1,000 children by hundreds of Catholic priests in  Pennsylvania.

Donohue called the report released by the Pennsylvania Supreme Court an “obscene lie” while defending the Catholic Church and their deplorable record of covering up and enabling the rape and sexual abuse of children by predatory priests.

In his post titled “Pennsylvania Grand Jury Report Debunked,” Donohue desperately tries to minimize the findings of the Pennsylvania Supreme Court, and in so doing Donohue reveals the profound poverty of both his intellect and his character.

At one point in the deplorable post Donohue has the audacity to claim that the statement “the priests raped their victims” is actually a “myth,” writing:

Donohue also denies that the Catholic Church uses a “playbook” for concealing the truth about predatory priests:

Furthermore, Church officials were not following a “playbook” for using terms such as “inappropriate contact”—they were following the lexicon established by the John Jay professors.

Donohue goes on to denounce the media for using the term “pedophilia” to describe the incidents when, Donohue claims, most of the victims were “postpubescent.”

And, as he always does, Donohue rants that the media is providing cover for the LGBT movement by not describing the assailants as “gay priests” and by sensationalizing the “minority” of cases involving preteen girls. 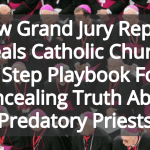