Steve West, an anti-semitic conservative Christian with a perverse respect for Hitler and a hatred of Jews and Muslims won the GOP nomination for a Clay County seat in the Missouri House.

West won the Republican primary by nearly 25 points on Tuesday, an impressive victory. In addition to being a Republican politician, West is also a radio show host on KCXL radio.

On his Monday morning radio show, Steve West promotes fanatical conspiracies about “Jewish cabals” that are “harvesting baby parts” through Planned Parenthood, that torture and molest children and that run the Republican Party.

For example, last year, on his KXL radio show, West celebrated Hitler, at one point declaring:

Looking back in history, unfortunately, Hitler was right about what was taking place in Germany. And who was behind it.

… Besides his radio show, he (West) also has a YouTube channel and a website. Donning a wig and fake beard and calling himself Jack Justice, he has unleashed an array of bigotry including homophobia, anti-Semitism, Islamophobia and outright racism.

The Associated Press reports that the Missouri Republican Party issued a statement on Thursday denouncing West. The statement said in part:

One must wonder why the Missouri Republican Party waited to denounce West until after the vile candidate won the party nomination. 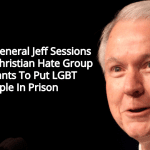 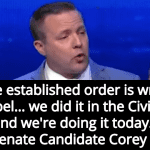 ANOM: The Conflict Escalation of Privacy Continues
Today, let me show you the increasing lengths some folks will go...
view all Nonreligious blogs
What Are Your Thoughts?leave a comment
Copyright 2008-2021, Patheos. All rights reserved.