Twitter sends “thoughts and prayers” to mock the NRA after America’s premier terrorist organization claims to be experiencing a financial crisis.

The National Rifle Association warns that it is in grave financial jeopardy, according to a recent court filing obtained by Rolling Stone, and that it could soon “be unable to exist… or pursue its advocacy mission.”

The good people on Twitter rejoiced at the news that the NRA could soon “be unable to exist… or pursue its advocacy mission,” with many people mocking the terrorist organization by sending “thoughts and prayers.”

If the @NRA goes bankrupt because of the State of New York, they’ll be in my thoughts and prayers.

Thoughts and prayers to the NRA who is saying they’re in a deep financial crisis and may be unable to exist. Maybe they could ask some of the Republicans they donated millions to for a loan:
Richard Burr – $7M
Roy Blunt – $4M
Cory Gardner – $3M
Marco Rubio – $3M

I would to offer the NRA my thoughts and prayers. https://t.co/p0FchInwqK

Allow me to be the first to offer my thoughts and prayers.https://t.co/rwYjNhdlSe

The NRA is going bankrupt.

Let’s be clear: The NRA should be mocked, they are a deadly and powerful terrorist organization with blood on its hands.

Death and Taxes reports on the carnage:

Market Watch reports that contrary to public opinion, the NRA does not speak for all gun owners; in fact, only a small, deranged minority of gun owners are actually NRA members:

Yet despite the relatively small numbers, the NRA has terrorized politicians and civilians alike for decades.

As a nation we live with and tolerate a culture of gun violence. All the while any proposal to enact sensible reform to curb gun violence is squashed by the the NRA. Indeed, the NRA intimidates and bullies politicians and others,  while spreading deception and misinformation to the general public. They are the equivalent of the 20th century tobacco lobby, merchants of death, terrorists claiming their product is safe while countless Americans die.

Bottom line: The NRA should be mocked. Indeed, the NRA and its supporters should be ridiculed and shunned. In fact, the NRA needs to be stopped before more Americans die because of the irrational and dangerous policy goals of America’s premier terrorist organization. 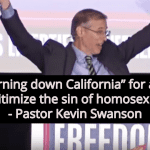 August 4, 2018
Conservative Pastor: 'God Is Burning Down California' Because The Gays
Next Post 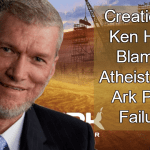 August 6, 2018 Creationist Ken Ham Blames Atheists For Reports That Ark Park Is Failing
Recent Comments
0 | Leave a Comment
Browse Our Archives
get the latest from
Progressive Secular Humanist
Sign up for our newsletter
POPULAR AT PATHEOS Nonreligious
1