Pray to Jesus or lose your job: An Oregon construction worker is fired for refusing to attend a weekly, mandatory Bible study.

Ryan Coleman, a 34-year-old construction worker, has filed an $800,000 lawsuit against  Dahled Up Construction, a construction company located in Albany, Oregon, claiming the owner of the company fired him after he refused to attend weekly Bible study.

Ryan Coleman said he was hired by Dahled Up Construction Inc. in October 2017. Soon after he started working there, he said he discovered his boss Joel Dahl required employees to attend a Christian Bible study during work time.

Coleman, who is not a practicing Christian, told Dahl he was not comfortable attending and that it was it illegal for him to require his employees to do so.

However, he said Dahl insisted he attend. Coleman said he believed he had no other choice and went to the Bible study in order to keep his job.

In April, Coleman said he once again told Dahl on the phone that he had a right not to attend the Bible study, and was then fired by Dahl.

Coleman claims Dahl and his company discriminated against him due to his religious beliefs and is asking for $800,000 in damages.

Dahl’s attorney Kent Hickman told the Oregonian that Dahl does require all his employees to attend Bible study and said it is legal because he pays them to attend.

Coleman, who reports he is half Caucasian and half Native American, with Cherokee and Blackfoot heritage, says his religious beliefs are indigenous, and that though he tried to keep an open mind about the mandatory weekly Bible study, he ultimately could not continue with the practice.

Coleman worked for the small construction company from October 2017 to this past April, when he was fired. Explaining how he was fired, Coleman told The Oregonian/OregonLive:

This is so illegal. Unless you are a religious organization like a church, you cannot force your employees to participate in religious activities.

Coleman’s attorney is correct. Indeed, forcing employees to participate in religious activities is not only illegal, it is also immoral.

The Oregonian/OregonLive reports that Kent Hickam, Dahl’s attorney, doesn’t dispute that Dahl’s company requires all of his employees to attend Bible study, but claims that it’s legal because Dahl pays them to attend.

The company’s Facebook page is littered with praise for Jesus and God for the work that is done on homes.

“Fixing up this old house at times I was discouraged ‘cause there was so much to fix. But Me and God did this together and we got er done,” one post said.

Bottom line: This is an open and shut case. Dahl admits that he forces his employees to attend a mandatory Bible study every week, or they will lose their job. This is not only immoral, it is also illegal. Coleman should get everything he is asking for, and more. 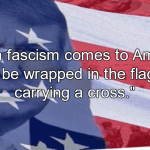 August 29, 2018
‘Fascism In The Flesh’: Trump Warns of Violence If Dems Win Midterms
Next Post 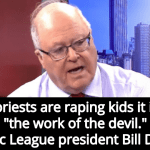