Report: Over 300 Predator Priests, More Than 1,000 Child Victims In Pennsylvania

“Priests were raping little boys and little girls” – A long awaited report finds over 300 predator priests sexually abused over a 1,000 children in Pennsylvania.

The numbers are horrific, but not surprising. It is a well established fact that the Catholic Church has been and continues to be riddled with predatory clergy that rape and sexually abuse children, using their supposed spiritual authority as church leaders to intimidate and bully their victims into silence.

Priests were raping little boys and girls, and the men of God who were responsible for them not only did nothing; they hid it all.

The Pennsylvania Supreme Court on Tuesday released a sweeping grand jury report on sex abuse in the Catholic Church, listing more than 300 accused clergy and detailing a “systematic” coverup effort by church leaders over 70 years.

There were hundreds of “predator priests” sexually abusing more than 1,000 children in Pennsylvania for decades — all while being shielded by Roman Catholic Church leaders, according to a scathing grand jury report released Tuesday.

More than 1,000 children — and possibly many more — were molested by hundreds of Roman Catholic priests in six Pennsylvania dioceses, while senior church officials took steps to cover it up, according to a landmark grand jury report released Tuesday.

The grand jury said it believes the “real number” of abused children might be “in the thousands” since some records were lost and victims were afraid to come forward. The report said more than 300 clergy committed the abuse over a period of decades.

The story is all too familiar: Catholic priests rape and sexually abuse children, and Catholic Church leaders cover up the abuse. This is standard operating procedure for the church, and has been for decades. In fact, the Catholic Church fought for months to stop the public release of this most recent grand jury report, repeating the pattern of covering up and ultimately enabling pedophile priests, and the rape and sexual abuse of children.

Friendly Atheist notes a couple of heartbreaking passages from the introduction to the Grand Jury Report:

Priests were raping little boys and girls, and the men of God who were responsible for them not only did nothing; they hid it all. For decades. Monsignors, auxiliary bishops, bishops, archbishops, cardinals have mostly been protected; many, including some named in this report, have been promoted. Until that changes, we think it is too early to close the book on the Catholic Church sex scandal.

Bottom line: The Catholic Church is rotten to the core, and a long awaited grand jury report finds over 300 predator priests sexually abused over a 1,000 children in Pennsylvania. 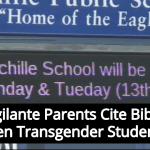 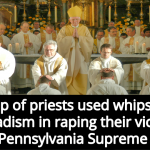 August 15, 2018 Catholic Priests Ran Child Porn Ring Out Of Pittsburgh Diocese
Recent Comments
0 | Leave a Comment
"One of those medications used in treating attention deficit disorder is adderall . Adderall should ..."
leebrownmark@gmail.com Report: President Donald Trump Is An ..."
""Some of the ‘legitimate’ commenters, however, are amongst the best there are."Not buying it. Some ..."
alverant Fox News Host Bill Hemmer Warns ..."
"It’s become a bit of a magnet to RWs because Jonathan, quite deliberately, refuses to ..."
Geoff Benson Fox News Host Bill Hemmer Warns ..."
"Evil turns in upon itself."
Brianna LaPoint Pentecostal Christians Are Burning Australia’s Sacred ..."
Browse Our Archives
get the latest from
Progressive Secular Humanist
Sign up for our newsletter
POPULAR AT PATHEOS Nonreligious
1