Dishonest U.S. Bishops refuse to take responsibility for their crimes, and blame the gays for priests raping children.

The same church leaders who protected and enabled predator priests for decades are now blaming the gays for the epidemic of Catholic priests raping and sexually abusing children.

In his letter Bishop Morlino blames the gays, citing “deviant sexual — almost exclusively homosexual — acts by clerics,” as the source of the devastating and insurmountable moral crisis faced by the Catholic Church. In so doing Bishop Morlino conveniently ignores the fact that the real problem facing the church is Catholic priests raping and sexually assaulting children. And, of course, church leaders like himself in the Catholic hierarchy who have been protecting and enabling predator priests for decades.

Reporting on the attempt by Catholic Bishops to blame some mysterious “homosexual subculture” for the rape and sexual assault of children by Catholic priests, Andrew Seidel notes:

This is a disgusting attempt to paint LGBTQ Americans, who have made great strides toward acceptance and equality despite the best efforts of the Catholic Church, as “disordered,” “deviant,” and “ in violation of the natural moral law.” As the tidal wave of this scandal again crashes down on his church, Morlino is trying to shift the blame.

Seidel is correct. Morlino is trying to shift the blame away from Catholic clergy and onto some mysterious “homosexual subculture,” using gays as a scapegoat in an intellectually dishonest and morally bankrupt charade.

Seidel continues, noting that Morlino is wrong, and that there is no evidence whatsoever that links homosexuality to pedophilia:

Morlino is wrong. There is not now, nor has there ever been, a link between homosexuality and pedophilia. This myth, bred of ignorance, has been debunked countless times. For those of us who dwell in the world of facts and reality, the research is clear: Most sexual abuse is committed by heterosexual males.

Bottom line: Cowardly and despicable U.S. Bishops like Robert Morlino refuse to take responsibility for the absolute and abject moral failure of the Catholic Church, and instead they blame the gays. 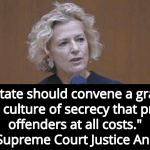 August 22, 2018 Illinois Supreme Court Justice Calls For National Investigation Into Predator Priests
Recent Comments
0 | Leave a Comment
"Please, read the parable told by Jesus, of the owner of the vine going away, ..."
Alex Stewart Pastor Claims Coronavirus Is Satanic Plot ..."
"One of those medications used in treating attention deficit disorder is adderall . Adderall should ..."
leebrownmark@gmail.com Report: President Donald Trump Is An ..."
""Some of the ‘legitimate’ commenters, however, are amongst the best there are."Not buying it. Some ..."
alverant Fox News Host Bill Hemmer Warns ..."
"It’s become a bit of a magnet to RWs because Jonathan, quite deliberately, refuses to ..."
Geoff Benson Fox News Host Bill Hemmer Warns ..."
Browse Our Archives
get the latest from
Progressive Secular Humanist
Sign up for our newsletter
POPULAR AT PATHEOS Nonreligious
1