Responsibility in sex is unpopular among today’s “hip” educators. Bowing to social justice warriors, rabid feminists and “LGBTQ” advocates, abstinence is discarded as the equivalent of racism. Never mind that this reasoning is short on reality and long on mythology.

Harvey is the founder of Mission America, which the SPLC in 2012 added to its list of anti-LGBT hate groups. Earlier this year Harvey declared that homosexuality is God’s punishment for abortion. Yeah. Like many anti-LGBT activists, Harvey advocates for criminalizing homosexuality in the United States.

Linda Harvey, the founder of Mission: America, has a history of saying the dumbest possible things you can imagine. She’s said homosexuality is the result of legal abortion, Disney’s first openly gay character should’ve been molested first in order to be more realistic, and that her childhood Ouija board saved her from a homosexual Halloween.

Indeed, Harvey is the epitome of the deplorable, anti-gay, conservative Christian bigot.

Last year Harvey wanted to trademark the rainbow to prevent it from being raped by gays and lesbians. Writing for WorldNetDaily Harvey wondered “Can we trademark the rainbow?” while complaining that the “sweet rainbow image” has been “violated” and “raped” by “homosexual sin.”

In short, Harvey is a delusional and dangerous Christian extremist who will demonize the LGBT community at every opportunity. She is a big believer in the supposed “gay agenda” and frequently claims that public schools “are training our children to become homosexuals.” 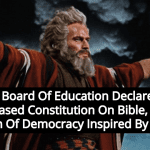 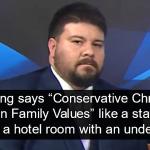 September 17, 2018 Christian Lawmaker Ralph Shortey Sentenced To 15 Years For Child Sex Trafficking
Recent Comments
0 | Leave a Comment
"And JC said, starve the little chidren, for as much as you do it unto ..."
David Cromie Fox News Guest: Children Don’t Deserve ..."
""....are there no work houses....""
Erik1986 Fox News Guest: Children Don’t Deserve ..."
"Tsarist Russia was anything but a free market, and neither was the aristocratic system in ..."
Person223 Fox News Guest: Children Don’t Deserve ..."
"The right of males to reproduce, rendering a woman's reproductive organs chattel, disregarding the whole ..."
Anon E Moss New Legislation In Tennessee Would Allow ..."
Browse Our Archives
get the latest from
Nonreligious
Sign up for our newsletter
POPULAR AT PATHEOS Nonreligious
1