After being caught in a hotel room with an underage boy while serving as an Oklahoma State Senator, Christian conservative Ralph Shortey is sentenced to 15 years for child sex trafficking.

A former Republican state senator in Oklahoma has been sentenced to 15 years in prison on a child sex trafficking charge.

Ralph Shortey was sentenced Monday in federal court in Oklahoma City. He had faced a sentence of up to life in prison and a fine of up to $250,000.

Shortey pleaded guilty in November in exchange for prosecutors dropping three child pornography charges against him.

Last year Shortey was charged with engaging in child prostitution and other felonies after being caught in a hotel room with an underage boy.

At the time of his arrest police body cam footage shows Shortey wearing an obnoxious and misogynistic T-shirt saying “make me a sandwich” with a reference to the Biblical quote from Ephesians 5:22:

Wives, submit yourselves to your own husbands as you do to the Lord.

Shortey is married with four children.

Elected to the state senate in 2010, Shortey represented Oklahoma City before being arrested on child sex trafficking charges last spring.

Before his arrest, Shortey was a prominent Christian conservative in Oklahoma politics, known for being a birther, and a Trump supporter.

In fact, Shortey was the Oklahoma state chair of President Donald Trump’s campaign during the 2016 primary elections.

Also, before being busted with an underage boy in his hotel room, the anti-abortion, Christian conservative, Republican state senator made national news in 2012 when he proposed a bill that would ban human fetuses from being used in food.

(“.. a bill that would ban human fetuses from being used in food.” Wow!)

According to reports, Shortey “attended Heartland Baptist Bible College in Oklahoma City in preparation for mission work in Uganda,” before beginning his political career.

Bottom line: Nothing says “conservative Christian Republican family values” like a state senator caught in a hotel room with an underage boy. 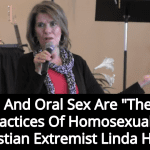 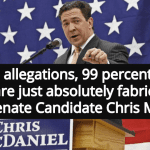 September 18, 2018 GOP Senate Candidate Claims 99% Of Rape Allegations ‘Are Just Absolutely Fabricated’
Recent Comments
0 | Leave a Comment
"And JC said, starve the little chidren, for as much as you do it unto ..."
David Cromie Fox News Guest: Children Don’t Deserve ..."
""....are there no work houses....""
Erik1986 Fox News Guest: Children Don’t Deserve ..."
"Tsarist Russia was anything but a free market, and neither was the aristocratic system in ..."
Person223 Fox News Guest: Children Don’t Deserve ..."
"The right of males to reproduce, rendering a woman's reproductive organs chattel, disregarding the whole ..."
Anon E Moss New Legislation In Tennessee Would Allow ..."
Browse Our Archives
get the latest from
Nonreligious
Sign up for our newsletter
POPULAR AT PATHEOS Nonreligious
1