Kavanaugh is accused of sexually assaulting multiple women, including Christine Blasey Ford. Writing for the ultra-conservative website Barbwire, Boys argues that because no one heard Ford scream while Kavanaugh was sexually assaulting her, she could not have been raped. Boys makes this absurd argument by referencing the Bible.

Rape is having sex with a woman while she screams for help. No scream, no rape according to Deuteronomy 22:23-24. [Christine Blasey] Ford says Kavanaugh held his hand over her mouth so did she scream for help when his hand was elsewhere? After all, it was in a bedroom of a house; surely, one of the other 4 teens could have heard him scream when she bit his hand.

Did she bite his hand? Poke him in the eye? Women know instinctively how to protect their honor: screaming, shouting, slapping, spitting, slugging, and stabbing with a finger, pencil, or hat pin. Since she did not cry out or stab him, I will not believe her without a film of the event.

If a man happens to meet in a town a virgin pledged to be married and he sleeps with her,

you shall take both of them to the gate of that town and stone them to death—the young woman because she was in a town and did not scream for help, and the man because he violated another man’s wife. You must purge the evil from among you.

In other words, according to the Bible, and conservative Christians like Boys, if the woman doesn’t scream, even if she is prevented from screaming because her attacker has his hand over her mouth, the woman is at fault.

After referencing Deuteronomy to defend Kavanaugh, Boys goes on to cite the Book of Matthew:

Moreover, Matthew 18:16 clearly commands that there must be at least two witnesses to validate a charge against a person. This is a repeat of Old Testament law. Ford has no witnesses. The other man who was allegedly there, Mark Judge said, “It’s just absolutely nuts. I never saw Brett act that way.” This week, another teen that was supposed to be there Patrick J. Smyth said the incident did not happen. That should settle it; now let’s all go home, pull down the shades, and get some sleep.

For Boys, that settles it. The Bible commands “that there must be at least two witnesses to validate a charge against a person.” Therefore, no witnesses, no crime. How convenient.

It is clear that Boys, and the many other Christians who think like Boys, have no concern for the truth. Their only interest is confirming a religious extremist like Brett Kavanaugh to the Supreme Court. 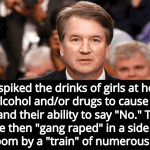 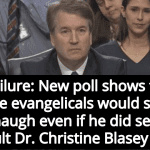 September 27, 2018 48% Of White Evangelicals Would Support Kavanaugh Even If He Sexually Assaulted Ford
Recent Comments
0 | Leave a Comment
"And JC said, starve the little chidren, for as much as you do it unto ..."
David Cromie Fox News Guest: Children Don’t Deserve ..."
""....are there no work houses....""
Erik1986 Fox News Guest: Children Don’t Deserve ..."
"Tsarist Russia was anything but a free market, and neither was the aristocratic system in ..."
Person223 Fox News Guest: Children Don’t Deserve ..."
"The right of males to reproduce, rendering a woman's reproductive organs chattel, disregarding the whole ..."
Anon E Moss New Legislation In Tennessee Would Allow ..."
Browse Our Archives
get the latest from
Nonreligious
Sign up for our newsletter
POPULAR AT PATHEOS Nonreligious
1