Kavanaugh, Trump’s nominee to the U.S. Supreme Court, indicated that if confirmed as a Supreme Court Justice he would support allowing Christian prayers at public school events in a little noticed moment during day 2 of his Supreme Court confirmation hearings before the Senate Judiciary Committee.

Freedom From Religion Foundation reports that Kavanaugh expressed his support for prayer in public school in an exchange with Sen. John Cornyn during day 2 of his Supreme Court confirmation:

… in an exchange with his old buddy Sen. John Cornyn, R-Texas, Kavanaugh tacitly expressed his agreement that the landmark 2000 Supreme Court case, Santa Fe v. Doe, was incorrectly decided because it was hostile toward religion.

In an amicus brief to the Supreme Court for the landmark case Santa Fe Independent School District v. Doe in 2000, Kavanaugh argued that the Supreme Court should allow the machinery of the state, our public schools, to be used to proselytize students. Kavanaugh argued that the school had to provide religious students with a government megaphone that they could use to impose prayer on other students.

Kavanaugh wrote an amicus brief in December 1999 in favor of a Texas high school’s policy allowing the use of a public address system for student-led and student-initiated prayers at school football games. The amicus brief, on behalf of Oklahoma Republican Reps. Steve Largent and J.C. Watts, argued that the policy passed constitutional muster — an argument the Supreme Court rejected. In a 6-3 ruling, the court declared the school policy allowing prayer unconstitutional under the First Amendment’s Establishment Clause.

The fact that Kavanaugh supports public school students being forced to endure Christian prayers should come as no surprise, given the fact that the Trump nominee has a long record of ignoring and denying the separation of church and state.

Kavanaugh would tear down Thomas Jefferson’s “wall of separation between church and state.” He praised jurisprudence that “persuasively criticized” Jefferson’s metaphor of “a strict wall of separation between church and state,” which explains the Establishment Clause of the First Amendment and the divorce between government and religion. Kavanaugh believes that Jefferson’s metaphor, adopted by the Supreme Court since 1878, is “based on bad history,” is “useless as a guide to judging,” and, most alarmingly, that “the wall metaphor was wrong as a matter of law and history.”

Bottom line: Kavanaugh is no friend to the Constitution, and is openly hostile to the separation of church and state. In addition, if confirmed, the Trump nominee would support Christian prayers at public school events. 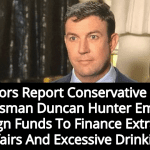 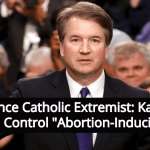