Jair Bolsonaro, Brazil’s new president, is a dangerous Christian fascist who promises to remake Brazil into a Christian theocracy.

Promising to restore law and order and prioritize family values, Christian fascist Jair Bolsonaro won 55.2% of votes cast, making him the next president of Latin America’s largest nation and the world’s fourth-largest democracy.

Before his election Bolsonaro was a seven-term congressman with a reputation for making  racist, misogynist, and homophobic statements while maintaining close ties with and the support of powerful religious conservatives. 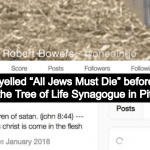 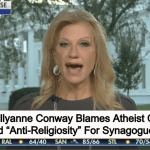 October 29, 2018 Kellyanne Conway Blames Anti-Religious Comedians For Synagogue Shooting
Recent Comments
0 | Leave a Comment
Browse Our Archives
get the latest from
Nonreligious
Sign up for our newsletter
POPULAR AT PATHEOS Nonreligious
1