According to media reports evangelicals have been quietly pushing Trump to name Bachmann ambassador to the U.N. ever since  Nikki Haley abruptly announced her resignation from the post after several ethics complaints were lodged against her.

For example, Christian hate group leader Tony Perkins, speaking on the Truth & Liberty Coalition webcast with debunked Christian “historian” David Barton, shared his support for Bachmann as the next ambassador to the U.N.:

I actually was with Nikki Haley and interviewed before her announcement that she was going to be stepping down. She did a great job, I was impressed with what she did. I actually think that Michele Bachmann would make a great replacement for her at the United Nations. Michele, a former Congresswoman from Minnesota, a member of the House Intelligence Committee, ran for president. And is actually at the United Nations now, kind of leading a prayer ministry there. She’s tough, she’s intelligent. I think she would be a good choice for the president and I’ve kind of floated her name a little bit.

On Twitter, Rep. Steve King, a conservative Christian and Republican congressman from Iowa, also called for Bachmann to replace Haley at the U.N.:

Ambassador Niki Haley did a great job as U.S Ambassador to the UN. @RealDonaldTrump would do very well to appoint the Bold & Brilliant @MicheleBachmann as Niki’s successor.

Ambassador Niki Haley did a great job as U.S Ambassador to the UN. @RealDonaldTrump would do very well to appoint the Bold & Brilliant @MicheleBachmann as Niki’s successor.

As both Perkis and Markell allude to, last year Bachmann was named “Pastor to the United Nations.”

Discussing her “ministry” to the U.N. last year, Bachmann claimed that “the return of Jesus Christ is imminent,” and noted that “the clock is striking 11:59 on God’s time clock and as history is culminating in as read in Revelation.”

Bachmann explained the supposed importance of her new mission:

I believe that God is starting a new thing, and because the time is short before Christ comes again to this earth, He is giving everyone one more chance.

There was an attempt in the book of Genesis for all of the nations to come together and to raise a fist against God in pride and arrogance. It was called the Tower of Babel, and God dispersed the people at the Tower of Babel. Never again did all the nations of the earth come together until the League of Nations, under President Woodrow Wilson. That broke up, it didn’t work and then we have World War II and the U.N. was started and it’s been an organization that has had a lot of negative repercussions because it is not under a holy authority of a mighty God and there’s been vain imaginations of a fist again against an almighty God.

Previously, Michele Bachmann served as part of President Trump’s Evangelical Advisory Board, providing “support” to Trump on “issues important to Evangelicals and other people of faith in America.”

Bachmann is a controversial figure, and a dangerous Christian extremist. In the past Bachmann has:

Bottom line: Michele Bachmann is a dangerous and deranged Christian extremist, and evangelicals are pressuring Trump to name her the next ambassador to the United Nations. 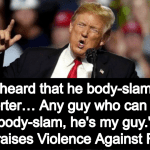 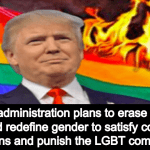 October 22, 2018 Trump Admin Plans To Erase Transgender Identity, Redefine Gender
Recent Comments
0 | Leave a Comment
Browse Our Archives
get the latest from
Nonreligious
Sign up for our newsletter
POPULAR AT PATHEOS Nonreligious
1