Scott Wagner, the GOP candidate for governor in Pennsylvania, explains climate change by claiming that “the earth moves closer to the sun every year.”

Wagner, a former Republican state senator and current candidate for governor, was giving the keynote address at an event for natural gas advocates whe he suggested his novel and erroneous scientific theory concerning climate change.

According to State Impact, an NPR affiliate, Wagner said:

We have more people. You know, humans have warm bodies. So is heat coming off? Things are changing, but I think we are, as a society, doing the best we can.

For the record, Wagner is wrong. Politifact explains:

Pennsylvania Sen. Scott Wagner said during a discussion about climate change that “the earth moves closer to the sun every year — you know the rotation of the earth. We’re moving closer to the sun.”

We rate the claim False.

Adding insult to injury, after Wagner made his ridiculous claim, student Rose Strauss challenged Wagner’s absurd argument that climate change is being caused by human body heat. In response, Wagner called Strauss “young and naive” and stated that Pennsylvanians are trying to elect a governor, not a scientist.

Wagner’s callous and dismissive response set off yet another firestorm, with memes like this quickly circulating on social media:

And earlier this month, in yet another public relations disaster, Wagner said he wanted to stomp his opponent’s face with golf cleats.

The good news: Wagner is expected to lose to his Democratic opponent Tom Wolf in November.

Bottom line: Scott Wagner, the GOP candidate for governor in Pennsylvania, explains climate change by claiming that “the earth moves closer to the sun every year.” 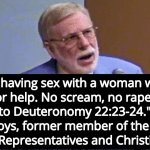 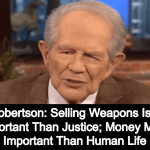 October 18, 2018 Pat Robertson on Jamal Khashoggi: Saudi Money More Important Than Journalist’s Life
Recent Comments
0 | Leave a Comment
"And JC said, starve the little chidren, for as much as you do it unto ..."
David Cromie Fox News Guest: Children Don’t Deserve ..."
""....are there no work houses....""
Erik1986 Fox News Guest: Children Don’t Deserve ..."
"Tsarist Russia was anything but a free market, and neither was the aristocratic system in ..."
Person223 Fox News Guest: Children Don’t Deserve ..."
"The right of males to reproduce, rendering a woman's reproductive organs chattel, disregarding the whole ..."
Anon E Moss New Legislation In Tennessee Would Allow ..."
Browse Our Archives
get the latest from
Nonreligious
Sign up for our newsletter
POPULAR AT PATHEOS Nonreligious
1