According to reports, Khashoggi, a journalist working for The Washington Post and living in the United States, was tortured, murdered, and dismembered by agents of the Saudi government after entering the Saudi consulate in Istanbul, Turkey, on Oct. 2.

However, in a callous disregard for human life, for human decency, and the rule of law, televangelist Pat Robertson, appearing on his Christian television show “The 700 Club,” said America’s relationship with Saudi Arabia is too important to risk over the assassination of a journalist working for The Washington Post.

Pat Robertson responds to reports that the Saudis murdered a journalist by telling everyone to calm down and focus on the important things, like the lucrative arms deal we have with them. pic.twitter.com/06b7s3R6Xe

We’ve got to cool the rhetoric. Calls for sanctions and calls for punitive actions against the Saudis is ill-advised … You’ve got a hundred billion dollars worth of arms sales—which is, you know, that’s one of those things—but more than that, we’ve got to have some Arab allies. We have to have it! We cannot alienate a biggest player in the Middle East who is a bulwark against Iran.

We’ve had so many people killed. We’ve had CIA people killed in Lebanon. People have been taken hostage over the years. I know it’s bad, but we’ve had all kinds of stuff, but you don’t blow up an international alliance over one person. I mean, I’m sorry.

We’ve got an arms deal that everybody wanted a piece of. It’ll be a lot of jobs, a lot of money come to our coffers. It’s not something you want to blow up willy-nilly.

Corinthians – If one member suffers, all suffer together; if one member is honored, all rejoice together.

One would think a faith leader would be guided by this sentiment.
OR empirical evidence

NO $100bn deal has been agreed upon https://t.co/EUjuCxsi8W

Proof Trump’s evangelical base is a cult: Until Trump excused a Saudi prince murderer who paid him off American Evangelicals would’ve cheered if Trump had nuked Mecca but now Pat Robertson and the gang are defending the Saudi perpetrators of 9/11 (and they called Obama a Muslim!)

Pat Robertson giving a pass to the most powerful Muslim despot on earth for dismembering a journalist because President Donald Trump doesn’t want to endanger arms sales is peak American evangelicalism https://t.co/L9JyATpcNj

What goes into my mouth isn’t anywhere near as obscene as what comes out of Pat Robertson’s mouth. https://t.co/jx6ydVsWbr

Dear Pat Robertson: Remember when Jesus said it’s okay to deal with murderers as long as you can make a profit? Me neither. https://t.co/QgFDPEEoQG 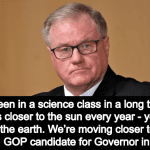 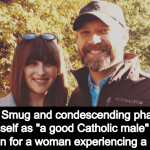 October 18, 2018 Catholic Pharmacist Refused To Fill Prescription For Woman Having Miscarriage
Recent Comments
0 | Leave a Comment
"And JC said, starve the little chidren, for as much as you do it unto ..."
David Cromie Fox News Guest: Children Don’t Deserve ..."
""....are there no work houses....""
Erik1986 Fox News Guest: Children Don’t Deserve ..."
"Tsarist Russia was anything but a free market, and neither was the aristocratic system in ..."
Person223 Fox News Guest: Children Don’t Deserve ..."
"The right of males to reproduce, rendering a woman's reproductive organs chattel, disregarding the whole ..."
Anon E Moss New Legislation In Tennessee Would Allow ..."
Browse Our Archives
get the latest from
Progressive Secular Humanist
Sign up for our newsletter
POPULAR AT PATHEOS Nonreligious
1