Christian martyr loses: Kim Davis, the Kentucky county clerk who went to jail rather than give gays a marriage license, lost her bid for re-election.

However, despite the accolades from anti-gay Christians, Davis, a Republican, lost her re-election bid to a Democrat, Elwood Caudill Jr.
Caudill defeated Davis 54 percent to 46 percent, and will serve a four-year term as the new Rowan County Clerk.

In 2015  Davis spent five days behind bars for refusing to issue same-sex marriage licenses — something she was legally obligated to do under state and federal law.

Reporting on the loss under the headline “Christian Adulteress Kim Davis Loses Her Fucking Job,” Joe My God notes:

Four times married Christian adulteress Kim Davis has lost her job as county clerk in Rowan County, Kentucky. Davis, you surely recall, earned international headlines in 2015 for refusing to issue a same-sex marriage license on “God’s authority,” becoming a darling of anti-LGBT hate groups and going on to campaign for a failed same-sex marriage ban in Romania.

Bottom line: Kim Davis, the anti-gay Kentucky county clerk who went to jail rather than give gays a marriage license, lost her bid for re-election. 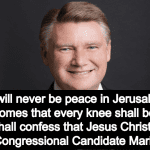 November 5, 2018
GOP Congressional Candidate: No Peace Until Jews And Muslims Convert To Christianity
Next Post 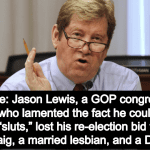 November 8, 2018 GOP Congressman Who Liked To Call Women ‘Sluts’ Loses Re-Election Bid To A Woman
Recent Comments
0 | Leave a Comment
Browse Our Archives
get the latest from
Progressive Secular Humanist
Sign up for our newsletter
POPULAR AT PATHEOS Nonreligious
1