Christians claim John Allen Chau is a martyr after he was killed in self-defense by isolated tribespeople on a remote island hundreds of miles off the coast of India.

Chau was shot dead with bows and arrows after he went to the remote North Sentinel Island in hopes of converting the isolated Sentinelese people to the Christian faith.

Chau’s attempt to convert the tribespeople was an illegal and immoral act that posed a grave risk to the health and welfare of the Sentinelese people. However, many Christians are calling Chau a martyr. CNN reports:

Those who knew the American missionary are calling him a martyr for the Christian faith.

And at least one prominent Christian group, International Christian Concern, is calling for the punishment of the isolated tribespeople. According to reports the organization is calling Chau’s death a “murder,” and wants the native people responsible for Chau’s death “brought to justice.”

However, other, more reasonable people, would call the killing of Chau self-defense, given the real threat Chau posed to the Sentinelese people. Not only was Chau determined to corrupt their culture with his ignorant Christian superstition, the arrogant and deplorable Christian missionary was also willing to expose the isolated tribespeople to disease and sickness they had no immunity to defend themselves against.

The Sentinelese live in isolation on the remote island in the Andaman and Nicobar archipelago, protected by Indian law to maintain their way of life and protect them from modern illnesses because they lack immunity.

Yet despite Chau’s reckless actions, many Christians are praising the arrogant and vain missionary. John Middleton Ramsey, Chau’s friend, said:

I see him as a martyr. He was someone who died out of love for these people to bring the good news of Jesus Christ.

Chau graduated from Oral Roberts University, where he got involved with Covenant Journey, a prominent Christian ministry. After Chau’s death the ministry hailed Chau as a “courageous martyr for Jesus.”

While some reports suggest that John Chau was merely an adventurer, his purpose in visiting North Sentinel was not for sightseeing. He took gifts to them and carried his Bible because he wanted to befriend the Sentinelese to share Jesus with them.

He loved Jesus more than life. John was a courageous martyr for Jesus. John’s life and his love for Jesus, to the point of giving his own life to bring the gospel to others, will be remembered and will echo throughout eternity. I know that God will bring good out this loss.

Obnoxious praise for a criminal who put his own interests above the interests of the Sentinelese people.

Even Chau’s family refuses to acknowledge the guilt and culpability of the careless missionary. Instead of apologizing for Chau’s reckless behavior, the family said they forgive the tribespeople who killed Chau in self-defense.

Bottom line: John Allen Chau is not the hero in this story. He is the villain – a villain in a long line of Christian villains who have abused, damaged, and killed countless indigenous people in their pernicious and profoundly immoral attempt to spread their ignorant Christian superstition. 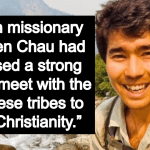 November 21, 2018
U.S. Missionary Killed By Remote Island Tribe He Wanted To Convert To Christianity
Next Post 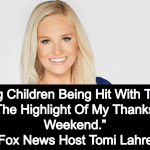