Rep. Jason Lewis, a GOP congressman from Minnesota who lamented the fact he could no longer call women “sluts,” lost his re-election bid to a woman.

Lewis lost his bid for re-election to Democrat Angie Craig.

Minnesota Republican Rep. Jason Lewis, who once lamented that he could no longer call women “sluts,” has lost his seat to Democrat Angie Craig…

Craig won by more than 5 percentage points in the race which CNN rated a “toss up.” The one-on-one race was a rematch of 2016, when Lewis narrowly beat Craig. Both sides saw the district as a key battleground, with the National Republican Congressional Committee releasing a targeted ad in September attacking Craig…

Craig’s defeat of Lewis carries a particular poetic justice, given the fact that Lewis was a proud and open misogynist Republican, while Craig is a married lesbian Democrat.

In fact, Lewis has a long and well documented history of misogyny, often expressing a callous contempt for women in society. In addition, Lewis has also made some controversial and deplorable comments concerning slavery.

As for lamenting the fact that he can no longer call women sluts, CNN reports:

In a recording from March 2012 Lewis can be heard arguing that women who are not modest should be shamed as sluts:

Well, the thing is, can we call anybody a slut? This is what begs the question. Take this woman out of it, take Rush out of it for a moment. Does a woman now have the right to behave — and I know there’s a double standard between the way men chase women and running and running around — you know, I’m not going to get there, but you know what I’m talking about. But it used to be that women were held to a little bit of a higher standard. We required modesty from women. Now, are we beyond those days where a woman can behave as a slut, but you can’t call her a slut?

Also reporting on the Minnesota lawmaker’s history of misogyny, The Atlantic shared some controversial comments the GOP congressman made denigrating young women voters:

I never thought in my lifetime where’d you have so many single, or I should say, yeah, single women who would vote on the issue of somebody else buying their diaphragm. This is a country in crisis. Those women are ignorant in, I mean, the most generic way. I don’t mean that to be a pejorative. They are simply ignorant of the important issues in life. Somebody’s got to educate them.

There’s something about young, single women where they’re behaving like Stepford wives. They walk in lockstep—is that really the most important thing to a 25-year old unmarried woman—uh, getting me to pay for her pills? Seriously?! Is that what we’ve been reduced to? You can be bought off for that?

That’s right, according to Lewis, women who are concerned with reproductive health are “ignorant.” Indeed, the misogyny is strong in this Republican, and it is good news that he will no longer be serving in congress.

Bottom line: Rep. Jason Lewis, a GOP congressman from Minnesota who lamented the fact he could no longer call women “sluts,” lost his re-election bid to a woman, Angie Craig, a married lesbian, and a Democrat. 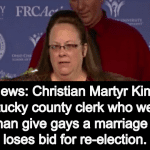 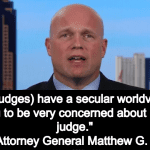