In a disturbing development, Washington state Rep. Matt Shea releases a four-page Christian manifesto titled “Biblical Basis for War.” The document calls for “Biblical law”, and suggests that those men who support gay marriage and abortion rights should be executed.

It’s a radical Christian call to arms, outlining 14 steps for seizing power and what to do afterward in explicit detail. It calls for an end to abortions, an end to same-sex marriage, and if enemies do not yield and everyone obey biblical law, all males will be killed.

Washington state Rep. Matt Shea admitted Wednesday that he wrote and distributed the four-page document, called the “Biblical Basis for War,” which includes 14 sections on how biblical war can and would unfold. Shea, a Republican who represents Spokane in the state’s House, is up for re-election in the midterms next week. He did not immediately respond to a request for comment.

In an email to The Spokesman-Review newspaper, Spokane County Sheriff Ozzie Knezovich said that he sent the manifesto to the FBI for investigation, noting:

The document Mr. Shea wrote is not a Sunday school project or an academic study. It is a ‘how to’ manual consistent with the ideology and operating philosophy of the Christian Identity/Aryan Nations movement and the Redoubt movement of the 1990s.

The goal of these groups has always been to create a white homeland consisting of Idaho, Montana, Wyoming, Oregon and Washington. The ideas presented in the (biblical war) document are how these groups intend to seize control, by force, should there be a governmental collapse or civil war.

However, Rep. Shea sees nothing wrong with his manifesto calling for Biblical law and the execution of those who oppose it. In a Facebook Live video released earlier this week Shea defended his manifesto while making ridiculous claims that he is being persecuted and that the U.S. is really a Christian nation:

Bottom line: Washington state Rep. Matt Shea has published a Christian manifesto calling for the execution of all males who refuse to follow “Biblical law.” 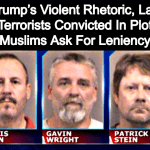 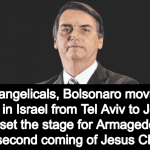 November 2, 2018 Chasing Armageddon: Brazil President-Elect Bolsonaro Will Move Embassy To Jerusalem
Recent Comments
0 | Leave a Comment
"And JC said, starve the little chidren, for as much as you do it unto ..."
David Cromie Fox News Guest: Children Don’t Deserve ..."
""....are there no work houses....""
Erik1986 Fox News Guest: Children Don’t Deserve ..."
"Tsarist Russia was anything but a free market, and neither was the aristocratic system in ..."
Person223 Fox News Guest: Children Don’t Deserve ..."
"The right of males to reproduce, rendering a woman's reproductive organs chattel, disregarding the whole ..."
Anon E Moss New Legislation In Tennessee Would Allow ..."
Browse Our Archives
get the latest from
Nonreligious
Sign up for our newsletter
POPULAR AT PATHEOS Nonreligious
1