GOP Senator Mike Lee of Utah warns that there will be “violence” and “civil war” if liberals gain control of the federal government.

Lee, a libertarian with unorthodox views concerning the U.S. Constitution, and a big proponent of states’ rights, delivered a speech to the conservative Federalist Society earlier this month where he warned of a “brewing civil war.”

In it, Lee warned of a brewing civil war, and claimed that the only way to avert violence would be to eradicate a long list of federal programs including “the interstate highway system,” funding for “K through 12 public education,” “federal higher education accreditation,” “early childhood education, the Department of Commerce,” “housing policy, workforce regulation,” and what Lee labeled the “huge glut of federally owned land.”

In other words, Lee is arguing that if we don’t move to a system granting de facto sovereignty to the states and eliminate massive federal programs like public education and interstate highways there will be a civil war.

In his speech Lee claimed that angry political rhetoric is “driving our politics toward violence,” declaring:

Ultimately, this will come down to a binary choice: federalism or violence.

For decades, we have pulled powers constitutionally reserved for the states and for the people into the federal government, and then, once they’re here, we have transferred those from the people’s elected lawmakers over to unaccountable, unelected bureaucrats, over to the administrative state.

Lee described the current state of affairs as a “fundamentally un-American contest” to “determine which half of our nation will have the power, at least temporarily, to unilaterally impose its will and its values on the other half.”

And, of course, Lee blamed this state of affairs on “the left.”

The Salt Lake Tribune reports that the progressive Alliance for a Better Utah issued a statement condemning Lee’s speech as “unnecessarily raising the specter of political violence.”

Every time political leaders discuss violence as a possibility, it increases the likelihood that a maniacal follower of theirs might consider that an endorsement of violence. Baseless fear-mongering has no place within our communities, and is inexcusable coming from our elected officials.

Bottom line: Utah Senator Mike Lee claims there will be a civil war if liberals gain control of the federal government. 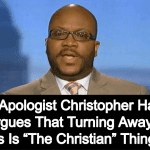 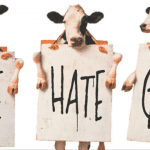 November 29, 2018 Chick-fil-A Still Hates Gay People, But Doesn’t Want To Be Labeled ‘Anti-Gay’ Anymore
Recent Comments
0 | Leave a Comment
Browse Our Archives
get the latest from
Nonreligious
Sign up for our newsletter
POPULAR AT PATHEOS Nonreligious
1