A fish rots from the head down: Top Vatican official Cardinal George Pell has been convicted of sexually abusing minors by a criminal court in Australia.

According to multiple reports, Cardinal Pell, who is the Vatican’s third most powerful official and a close advisor to Pope Francis, was convicted in Australia on charges that he sexually abused two choir boys in the late 1990s.

Cardinal George Pell, the Vatican’s third most powerful official, was found guilty on Tuesday of sexually abusing two choir boys in the late 1990s, a decision that makes him the highest-ranking Catholic Church official to face criminal convictions.

Pell took leave of his position at the Vatican last year to stand trial in Melbourne, where he was accused of sexually abusing two choir boys when he was the archbishop.

According to reports the victims were alter boys in the choir at St. Patrick’s Cathedral and were sexually abused by Pell inside the church.

The Catholic News Agency reports Pell will be sentenced in early 2019 and will not be incarcerated prior to his sentencing.

In addition to being found guilty of molesting the choir boys at St. Patrick’s Cathedral, Pell is also accused of sexually assaulting two boys in a swimming pool in Ballarat, Victoria. A criminal trial concerning that case is expected to begin early next year.

Pell has denied all accusations of inappropriate conduct and claims he is innocent. He is expected to appeal his conviction.

In the past Pell has shown little sympathy for the survivors of sexual abuse at the hands of Catholic clergy, and is on record claiming:

The Catholic Church is no more legally responsible for priests who abuse children than a trucking company which employs a driver who molests women. 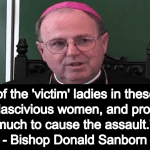 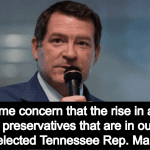 December 13, 2018 New GOP Congressman Mark Green Rejects Science, Claims Vaccines May Cause Autism
Recent Comments
0 | Leave a Comment
"And JC said, starve the little chidren, for as much as you do it unto ..."
David Cromie Fox News Guest: Children Don’t Deserve ..."
""....are there no work houses....""
Erik1986 Fox News Guest: Children Don’t Deserve ..."
"Tsarist Russia was anything but a free market, and neither was the aristocratic system in ..."
Person223 Fox News Guest: Children Don’t Deserve ..."
"The right of males to reproduce, rendering a woman's reproductive organs chattel, disregarding the whole ..."
Anon E Moss New Legislation In Tennessee Would Allow ..."
Browse Our Archives
get the latest from
Nonreligious
Sign up for our newsletter
POPULAR AT PATHEOS Nonreligious
1