Satan is your Daddy: Christian TV Host Rick Wiles explains that all non-Christians are children of Satan while appearing on his TruNews program.

Speaking earlier this week on his TruNews program Wiles declared:

… If you don’t serve Jesus Christ, you’re automatically Satan’s child. If you’re not a Christian, then Satan is your father. Whether you like that or not, that’s just the facts. The only way to get away from him is to renounce the works of the Devil…

On the bright side, it could be worse. Imagine if Rick Wiles was your father – now that would be Hell.

Another example of Wiles being a conservative Christian idiot: Last summer the Christian TV host  warned his followers that MSNBC’s Rachel Maddow was preparing to lead a bloody coup to overthrow the Trump administration. Wiles, commenting on a Maddow segment in which the MSNBC host argued that the U.S. must prepare for “the worst case scenario that Trump is compromised by Russia,” declared:

Bottom line: Rick Wiles, popular conservative Christian leader, explains to his television audience that  all non-Christians are children of Satan. 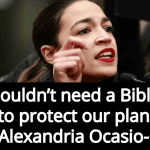 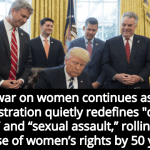