This week Pence started teaching art at Immanuel Christian School in Northern Virginia. The school bans gay and transgender students, and requires all employees to sign a pledge declaring marriage is only between a man and a woman.

Reporting on the story, Huffington Post notes Immanuel Christian School is a school where not everyone is welcome:

It’s not a school where everyone is welcome. In a “parent agreement” posted online, the school says it will refuse admission to students who participate in or condone homosexual activity. The 2018 employment application also makes candidates sign a pledge not to engage in homosexual activity or violate the “unique roles of male and female.”

I understand that the term ‘marriage’ has only one meaning; the uniting of one man and one woman. Moral misconduct which violates the bona fide occupational qualifications for employees includes, but is not limited to, such behaviors as the following: heterosexual activity outside of marriage (e.g., premarital sex, cohabitation, extramarital sex), homosexual or lesbian sexual activity, polygamy, transgender identity, any other violation of the unique roles of male and female, sexual harassment, use or viewing of pornographic material or websites.

In a parent agreement posted on the school’s website, it states that Immanuel Christian School reserves the right to “refuse admission” or “discontinue enrollment” of a student if “the atmosphere or conduct within a particular home, the activities of a parent or guardian, or the activities of the student are counter to, or are in opposition to, the biblical lifestyle the school teaches.” The prohibited conduct and activities include “sexual immorality,” “homosexual activity or bi-sexual activity.”

And it gets worse. NBC News goes on to note:

In this “biblical morality” section, the parent agreement cites Leviticus 20:13, a bible passage that states, “If a man also lie with mankind, as he lieth with a woman, both of them have committed an abomination: they shall surely be put to death; their blood shall be upon them.”

In other words, the parent agreement stresses the fact that according to the Bible, gays should be put to death.

According to reports, Karen Pence will be teaching art at Immanuel Christian School twice a week until May.  Pence previously taught at the school for 12 years when her husband, Mike Pence, served as a congressman.

I am excited to be back in the classroom and doing what I love to do, which is to teach art to elementary students. I have missed teaching art, and it’s great to return to the school where I taught art for twelve years.

When asked by NBC News about the school’s deplorable policy of discrimination, bigotry, and hostility towards the LGBT community, Pence’s communications director stated:

It’s absurd that her decision to teach art to children at a Christian school, and the school’s religious beliefs, are under attack.

Bottom line: Karen Pence, wife of Vice President Mike Pence, is “excited” to be teaching at a Christian school that promotes bigotry and discrimination against all LGBT people, and  bans LGBT teachers and students. 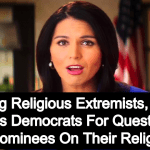