In the video, the young men, identified as Covington Catholic High School students from Kentucky, can be seen chanting, mocking, and harrassing Phillips on the steps of the Lincoln Memorial.

One of the teens can be seen standing face-to-face with the elder, smirking and saying nothing, while the man sang and played a drum.

Covington Catholic High School students surrounded, intimidated and chanted over Native Americans singing about indigenous peoples’ strength and spirit, according to interviews with attendees of the inaugural Indigenous Peoples March in Washington, D.C.

In a statement via Twitter Congresswoman Deb Haaland said:

This Veteran put his life on the line for our country. The students’ display of blatant hate, disrespect, and intolerance is a signal of how common decency has decayed under this administration. Heartbreaking.

This Veteran put his life on the line for our country. The students’ display of blatant hate, disrespect, and intolerance is a signal of how common decency has decayed under this administration. Heartbreaking. https://t.co/NuPnYu9FP4

In an attempt at damage control, Covington Catholic High School and the Diocese of Covington issued a joint statement Saturday.

In the statement the school and Diocese of Covington said they were reviewing the incident and they would “take appropriate action, up to and including expulsion.” The statement read in part:

We condemn the actions of the Covington Catholic High School students towards Nathan Phillips specifically, and Native Americans in general, Jan. 18, after the March for Life, in Washington, D.C. We extend our deepest apologies to Mr. Phillips. This behavior is opposed to the Church’s teachings on the dignity and respect of the human person.

We know this incident also has tainted the entire witness of the March for Life and express our most sincere apologies to all those who attended the March and all those who support the pro-life movement.

Here’s another video of these kids harassing this Native American protestor. The ignorance, the bigotry, is infuriating. This is not the future of this nation.

An indigenous man politely reminds them they are on stolen land and a student responds, “Land gets stolen. That’s how it works. It’s the way of the world.” via @ka_ya11 IG #IndigenousPeoplesMarch pic.twitter.com/SYun9wkzpY

This is happening in 2019. Appalled & enraged doesn’t BEGIN to cover it. These young men r part of an allegedly spiritual group, #CovingtonCatholic school. Where are their teachers, their elders? I give elder #NathanPhillips, a Vietnam Vet & Omaha elder, my respect & gratitude. https://t.co/0Duz1T18F6 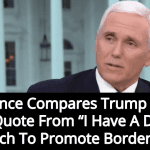 January 20, 2019 Pence Claims Trump Is Just Like Martin Luther King Jr. For ‘Inspiring Us’ With Border Wall
Recent Comments
0 | Leave a Comment
Browse Our Archives
get the latest from
Progressive Secular Humanist
Sign up for our newsletter
POPULAR AT PATHEOS Nonreligious
1