Pence Claims Trump Is Just Like Martin Luther King Jr. For ‘Inspiring Us’ With Border Wall

The stupid, it burns: Vice President Mike Pence says President Donald Trump is like the late Dr. Martin Luther King Jr. because Trump is “inspiring us” with a border wall.

Appearing on the Sunday mornings edition of Face the Nation on CBS News, Pence told host Margaret Brennan that Donald Trump was like Martin Luther King Jr. because both men were interested in making real “the promise of Democracy.”

In a convoluted response to a question about the lack of support for Trump’s wall, Pence said:

But, I think what the American people saw the president do yesterday was say, I- I- you know I- I want to set the table for us resolving this issue in a way that achieves his objectives to secure the border, end the humanitarian security crisis, end the government shutdown, but also to- to bring together- bring together the Democrats’ priorities to accomplish that. That’s what the American people expect us to do. And- and honestly you know- you know the hearts and minds of the American people today are thinking a lot about it being the weekend where we remember the life and work of the Reverend Dr. Martin Luther King Jr. But one of my favorite quotes from Dr. King was, “Now is the time to make real the promises of democracy.” You think of how he changed America. He inspired us to change through the legislative process to become a more perfect union. That’s exactly what President Trump is calling on the Congress to do. Come to the table in a spirit of good faith. We’ll secure our border, we’ll reopen the government and we’ll move our nation forward as the president said yesterday to even a broader discussion about immigration reform in the months ahead.

Pence quotes from Martin Luther King Jr.’s “I Have A Dream” speech to argue for Trump’s latest pitch for wall money: “Now is the time to make real the promises of Democracy.” pic.twitter.com/oJPZEG59BQ

Bottom line: Mike Pence abuses the memory of the late Dr. Martin Luther King Jr. in the hopes of building a monument to racism in the form of Trump’s border wall. 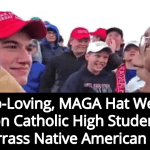 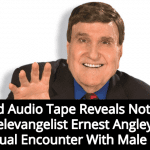 January 21, 2019 Anti-Gay Televangelist Ernest Angley Caught On Tape Admitting To Sexual Relations With Man
Recent Comments
0 | Leave a Comment
"Characters and stories from the bible have already been cancelled. By christians who chose which ..."
creativerealms Fox News Host Bill Hemmer Warns ..."
""follow my rules or burn for ever" ----- That's NOT what the Bible says."I agree, ..."
Mark Bradshaw Ana Kasparian’s Glorious Rant On Christianity ..."
"They're blaming the Democrats for banning Dr Seuss and posting warnings about Sesame Street etc.Of ..."
Jim Jones Fox News Host Bill Hemmer Warns ..."
"I agree, but the question is a translation issue, not an interpretation issue so my ..."
Kit Hadley-Day Ana Kasparian’s Glorious Rant On Christianity ..."
Browse Our Archives
get the latest from
Progressive Secular Humanist
Sign up for our newsletter
POPULAR AT PATHEOS Nonreligious
1