Bevin, a conservative Christian, once pledged his support to Davis, but now his lawyers are claiming Davis must pay.

Bottom line: Kim Davis, the Kentucky county clerk who went to jail rather than give gays a marriage license, must pay $222,000 in legal fees incurred because she refused to issue same-sex marriage licenses and in so doing violated the civil rights of same-sex couples trying to get married. 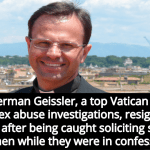 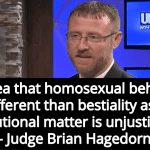 February 1, 2019 Wisconsin Supreme Court Candidate: No Difference Between Homosexuality And Bestiality
Recent Comments
0 | Leave a Comment
"I am called a bigot, a fool, referred to as "my kind", "nigerian white supremacist ..."
MrPeach Texas Governor: ‘The Problem is Not ..."
"you sure can run your mouth here, now explain your downvote to my harmless comment. ..."
Joshua Booker Million MAGA March: Militias, Proud Boys, ..."
"now I see why you hide your name. Some TROLL in ya=== lol!"
Brian Carnevale Texas Governor: ‘The Problem is Not ..."
"The cowardly censor at FA banned me years ago.There was an uncensored Angry Atheist channel, ..."
Pablo.Dali Fox News Host Bill Hemmer Warns ..."
Browse Our Archives
get the latest from
Progressive Secular Humanist
Sign up for our newsletter
POPULAR AT PATHEOS Nonreligious
1