Arizona Senator Kyrsten Sinema, who identifies as religiously unaffiliated, was sworn into office using a law book instead of the Bible.

In addition to eschewing the Christian Bible for her swearing in ceremony, Sinema is also the first openly bisexual person to be elected to the U.S. Senate.

Adding flavor to the story, ultra-conservative Christian Mike Pence, the Vice President of the U.S. and a man who is afraid to be alone with a woman, was obligated to administer the oath of office to Sinema.

I imagine Vice President Mike Pence, who administered the oath, died a little on the inside.

This is not the first time Sinema has refused to use a Bible in her swearing-in-ceremony.  In 2013, as members of the 113th Congress were sworn in, Representative Kyrsten Sinema placed her hand not over a copy of the Bible, but a copy of the U. S. Constitution.

And while some religious conservatives may object to a ceremony without the Bible, it is important to note that the Constitution clearly states that “no religious test shall ever be required as a qualification to any office or public trust under the United States” (Article VI, section 3).

Indeed, in the past, at least four presidents and numerous other public officials have been sworn into office without the use of a Bible.

For example, on March 4, 1825, John Quincy Adams was sworn in as the sixth president of the United States. When Chief Justice John Marshall administered the oath, Adams placed his hand not on a Bible, but on a law book containing the U.S. Constitution.

Bottom line: Arizona Senator Kyrsten Sinema, who identifies as religiously unaffiliated, was sworn into office using a law book instead of the Bible. 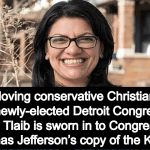 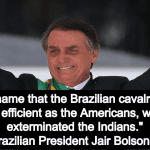