Hasson, a lieutenant in the Coast Guard, was arrested late last week on gun and drug charges. However, investigators soon learned the details of the self-proclaimed white supremacists plans to assassinate prominent liberal politicians and media figures in the hopes of bringing about a “white homeland.”

A U.S. Coast Guard lieutenant working in the nation’s capital lived a secret life as a “domestic terrorist” who aspired to mass murder and compiled a target list of prominent politicians and journalists, federal prosecutors allege in court papers.

Though court documents do not detail a specific planned date for an attack, the government said he had been amassing supplies and weapons since at least 2017, and searched the Internet using phrases such as ‘best place in dc to see congress people’ and ‘are supreme court justices protected.’

The defendant intends to murder innocent civilians on a scale rarely seen in this country. The defendant is a domestic terrorist, bent on committing acts dangerous to human life that are intended to affect governmental conduct.

In a letter to a prominent American neo-Nazi leader, Hasson identified himself as a White Nationalist and advocated for “focused violence” in order to establish a white homeland. In the letter Hasson writes:

I am a long time White Nationalist, having been a skinhead 30 plus years ago before my time in the military… I fully support the idea of a white homeland… The government has expertly infiltrated and destroyed from within most if not all Pro White organizations… We need a white homeland as Europe seems lost. How long we can hold out there and prevent niggerization of the Northwest until whites wake up on their own or are forcibly made to make a decision whether to roll over and die or to stand up remains to be seen. But I know a few younger ones that are tired of waiting and I feel we need them to resettle and build a community before they throw their life away with some desperate measure like shooting up a mosque in an area that doesn’t want us. They need a Homeland to fight for as America has turned its back on them…

NPR reports Hasson had targeted the following individuals for assassination:

Bottom line: Coast Guard officer Christopher Paul Hasson was arrested and is currently being held in custody after being caught plotting a domestic terrorist attack and mass shooting of prominent liberal political figures in hopes of establishing a “white homeland.” 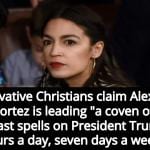 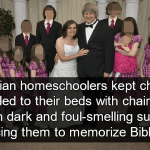 February 22, 2019 Christian Homeschoolers Plead Guilty To Torture And Abuse Of Their 13 Children
Recent Comments
0 | Leave a Comment
Browse Our Archives
get the latest from
Nonreligious
Sign up for our newsletter
POPULAR AT PATHEOS Nonreligious
1