Idiot in Chief: Speaking at the National Prayer Breakfast in Washington, D.C., President Trump praised “people of faith” for the “abolition of civil rights.”

Speaking at the event Trump said:

Since the founding of our nation, many of our greatest strides, from gaining our independence to abolition of civil rights, to extending the vote for women, have been led by people of faith and started in prayer. When we open our hearts to faith we fill our hearts with love.

In an ironic misspeak, Trump gives people of faith credit for our country’s greatest strides, like “the abolition of civil rights.” pic.twitter.com/wf8x4qgDr3

Trump says that some of America’s greatest accomplishments, including the “abolition of civil rights,” have been led by people of faith. Via Fox pic.twitter.com/Gqa8e74jLz

Some reports claim that Trump simply made a mistake, that the phrase “abolition of civil rights” was an accident, a gaffe. And maybe it was an accident, or perhaps an awkward but telling Freudian slip revealing Trump’s true feelings. However, two days ago, in a room full of news anchors, Trump said that he makes no gaffes, and that if he says something that people think is a gaffe, it’s really on purpose.

Speaking to reporters before the State Of The Union address earlier this week Trump bashed former Vice President Joe Biden while declaring that he makes no gaffes:

Biden was never very smart. He was a terrible student. His gaffes are unbelievable. When I say something that you might think is a gaffe, it’s on purpose; it’s not a gaffe. When Biden says something dumb, it’s because he’s dumb.

In addition to praising  “people of faith” for the “abolition of civil rights” Trump also praised  Second Lady Karen Pence for teaching at a private Christian school that bans LGBT students and employees.

Trump opens National Prayer Breakfast speech by applauding Karen Pence for teaching “at a Christian school.” You know, the one with SUPER anti-LGBTQ policies. “Thank you. Thank you, Karen.” pic.twitter.com/3ZpgtoKiud

JESUS SAYS: “Don’t pray in public. Only hypocrites do that.” Matthew 6:5-6

#TheThingIMissMost is having a President who, at a National Prayer Breakfast, wouldn’t list “the abolition of Civil Rights” as a GOOD thing.

People will say he was confused…by WORDS?
Some will say “Freudian Slip.”

Here is what Trump should have said at National Prayer Breakfast. #ChurchStateSeparation #FirstAmendment #GoodWithoutAGod pic.twitter.com/Q5SfmLugm5

Bottom line: The Idiot in Chief praises “people of faith” for the “abolition of civil rights” while speaking at the at the National Prayer Breakfast Thursday morning. 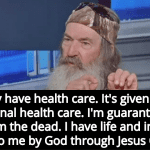 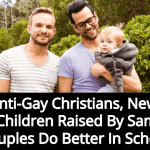