Deplorable ignorance: Wyoming Senator Lynn Hutchings defends the death penalty because Jesus was executed, and without the death penalty, “Jesus Christ would not have been able to die to absolve the sins of mankind.”

Earlier this week a bill abolishing the death penalty in Wyoming was defeated by the state Senate. The progressive bill passed in the state House, as well as a Senate legislative committee, but it was defeated on the Senate floor.

One of the bill’s opponents, GOP Senator Lynn Hutchings, “argued that without the death penalty, Jesus Christ would not have been able to die to absolve the sins of mankind, and therefore capital punishment should be maintained.”

That’s right, Republican Senator Lynn Hutchings believes the death penalty is a good thing because Jesus was executed. And if it’s good enough for Jesus – well you know the rest.

Hutchings is an idiot. But she is also a dangerous, hateful idiot. Earlier this week  Hutchings compared homosexuality to bestiality and pedophilia while speaking to members of the Cheyenne Central High School Gay-Straight Alliance.

According to reports, Hutchings made the following statement to the high school students:

Her remarks are despicable. It’s always ignorant and wrong to compare homosexuality to bestiality and pedophilia, but to do so in front of some gay and bisexual high school students is cruel beyond imagination.

Indeed, many are calling on Hutchings to resign after her hateful and dishonest remarks to the group of high school students.

Sen. Hutchings’s comments are indefensible, insensitive, and repugnant. Her remarks were not appropriate for any audience, but that she said this to children is especially revolting. It shows a clear lack of good judgment. Senate District 5 deserves a Senator who they can trust to behave and speak in a manner that upholds the dignity of the office and reflects an understanding that every person deserves to be treated with respect. Lynn Hutchings is now incapable of providing that level of representation. She must resign immediately.

Hutchings is a first-term senator and a former House member who is not afraid to use her religious superstition to terrorize and demean high school students, or justify the execution of criminals.

Surprise: She also claims to be “pro-life.” 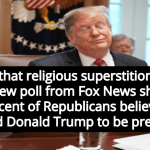 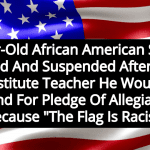 February 18, 2019 11-Year-Old Florida Student Arrested After Refusing To Stand For Pledge Of Allegiance
Recent Comments
0 | Leave a Comment
"And JC said, starve the little chidren, for as much as you do it unto ..."
David Cromie Fox News Guest: Children Don’t Deserve ..."
""....are there no work houses....""
Erik1986 Fox News Guest: Children Don’t Deserve ..."
"Tsarist Russia was anything but a free market, and neither was the aristocratic system in ..."
Person223 Fox News Guest: Children Don’t Deserve ..."
"The right of males to reproduce, rendering a woman's reproductive organs chattel, disregarding the whole ..."
Anon E Moss New Legislation In Tennessee Would Allow ..."
Browse Our Archives
get the latest from
Nonreligious
Sign up for our newsletter
POPULAR AT PATHEOS Nonreligious
1