However, Pell was sentenced to only six years in prison, and could be out on parole after only serving three years and eight months.

Pell is planning on appealing his conviction.

Last December, Cardinal Pell, who until quite recently was the Vatican’s third most powerful official and a close adviser to Pope Francis, was convicted in Australia on charges that he sexually abused two choir boys in the late 1990s.

Pell took leave of his position at the Vatican last year to stand trial in Melbourne, where he was accused of sexually abusing two choir boys when he was the archbishop.

According to reports the victims were alter boys in the choir at St. Patrick’s Cathedral and were sexually abused by Pell inside the church.

About his crimes, CNN reports:

After mass one Sunday in the late 1990s… Pell caught two choirboys drinking communion wine in the priest’s sacristy and one by one forced them to engage in sex acts, despite their sobs and pleas for him to let them go.

Yet despite the fact that Australian Cardinal George Pell will serve some time in prison, many felt the sentence was too lenient. For example, Michael Advocate, a survivor of child sexual abuse and founder of Victim Group Actions, described the sentence as “pathetic”. Advocate told 7 News:

[I’m] really disappointed.  It doesn’t send any deterrent at all. It doesn’t give the victims any sense of justice. You know, less than four years jail time for destroying the lives of two innocent young boys. Is their life only worth two years each?

May Pell rot in his cell… But what about appropriate respect for the victims? What about fair justice? … Six years? It’s pathetic.

Bottom line: Australian Cardinal George Pell was sentenced to six years in prison for sexually abusing two 13-year-old choirboys in the late 1990s, and could be out on parole after only serving three years and eight months. 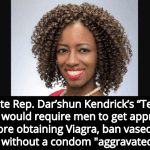 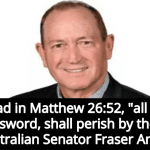 March 15, 2019 Australian Senator Cites Bible To Blame Muslims For New Zealand Terrorist Attack
Recent Comments
0 | Leave a Comment
Browse Our Archives
get the latest from
Nonreligious
Sign up for our newsletter
POPULAR AT PATHEOS Nonreligious
1