Conservative Christian radio host Bryan Fischer claims the New Zealand terrorist “took things into his own hands” because his government would not do anything to stop Islam.

Fischer, speaking on his “Focal Point” radio show a day after a terrorist attack left 49 people dead at two mosques in Christchurch, New Zealand, argued that “Islam is something that needs to be stopped” while rationalizing and justifying the terrible terror attack.

I hate Islam. I hate Islam because it is a danger to everything that is important to me: My faith, my country, my liberty, Christianity, civil rights. Everything that you and I treasure is threatened by Islam.

While Fischer reluctantly admitted that killing Muslims “is the wrong way to go about it,” he did claim that the shooter was “correct only in that Islam is something that does need to be stopped,” while arguing that such “vigilante justice” was inevitable because the government failed to act against Muslims:

One of the things that happens to guys like this is, if they’ve got some loose wiring to begin with and they see that their government is not doing what is necessary to protect them—whether it is from illegal aliens, whether it is from jihadis, whether it’s from vengeful Muslims—if they see that their government is not doing their jobs to promote justice, to carry out justice, to protect national security, then they’re going to start thinking, ‘Well, I can’t count on the government to do it, so I’m going to have to take things into my own hands.’

That’s where you get vigilante justice and, unfortunately, I think we saw a case of that today in New Zealand.

Bottom line: Conservative Christian radio host Bryan Fischer claims the New Zealand terrorist “took things into his own hands” because his government would not do anything to stop Islam. 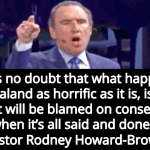 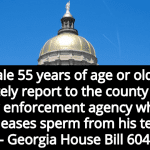 March 18, 2019 Georgia Bill Requires Men To Report ‘Every Release Of Sperm’ To Law Enforcement
Recent Comments
0 | Leave a Comment
Browse Our Archives
get the latest from
Nonreligious
Sign up for our newsletter
POPULAR AT PATHEOS Nonreligious
1