Oliva, a conservative Catholic and a Republican, was widely criticized after repeatedly referring to pregnant women as “host bodies” while discussing abortion.

Oliva’s use of the clinical term “host body” in describing a woman did not appear to be accidental. He used it five times during the interview.

During the interview the conservative Catholic lawmaker said:

Well the challenge there is that there are two lives involved. So, where I believe that we should stay out of people’s lives, I don’t believe that people’s lives should be taken. It’s a complex issue because one has to think, well there’s a host body and that host body has to have a certain amount of rights because at the end of the day it is that body that that carries this entire other body to term. But there is an additional life there.

As technology moves along, a human body can exist outside of its host body earlier and earlier. And so then one has to think, until what time does the host body have veto power over this other life?

Speaker Jose Oliva’s words are hurtful, dehumanizing, and misogynistic,. You’d expect to hear this offensive language in the Handmaid’s Tale — not from the Speaker of the Florida House of Representatives. With the start of the legislative session just days away, Speaker Oliva has insulted Florida women — and made clear he will not be their champion in Tallahassee.

After his deplorable remarks were made public, the conservative Catholic lawmaker said his use of the phrase “host bodies” was an “an attempt to use terminology found in medical ethics writings with the purpose of keeping the discussion dispassionate. The reaction undoubtedly shows it had the exact opposite effect.”

In an attempt at damage control Oliva issued the following statement of apology:

In a recent interview where the very controversial topic of abortion was raised I used the term ‘host’ to describe a pregnant woman. It was an attempt to use terminology found in medical ethics writings with the purpose of keeping the discussion dispassionate. The reaction undoubtedly shows it had the exact opposite effect. I apologize for having caused offense, my aim was the contrary. This is and will continue to be our societies greatest challenge. I strongly believe both mother and child have rights and the extent and balance of those rights remain in question. I regret my wording has distracted from the issue. My apologies to all.

And the Republican war on women continues… 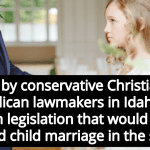 March 1, 2019
Idaho Republicans Kill Bill That Would Have Ended Child Marriage In The State
Next Post 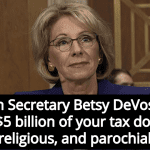 Miracles as Parables
In the closing stages of writing my latest book, The Resurrection: A Critical...
view all Nonreligious blogs
What Are Your Thoughts?leave a comment
Copyright 2008-2021, Patheos. All rights reserved.