More of that Christian theocracy: Allison Rushing, a dangerous religious extremist and former warrior for an anti-LGBT hate group, has been confirmed to a lifetime appointment as a federal judge.

Rushing was confirmed to the U.S. Court of Appeals for the Fourth Circuit by the Senate earlier this week on a 53-44 party-line vote, with all present Democrats voting against her, and all present Republicans voting for her.

The confirmation makes Rushing, 37, the youngest federal judge in the country, and also one of the most dangerous.

Before being confirmed Rushing worked for the Alliance Defending Freedom, a conservative Christian organization that has been classified as a hate group by the Southern Poverty Law Center.

The Freedom From Religion Foundation reports:

… in 2005 Rushing penned an article for Engage, The Federalist Society’s journal, entitled “Nothing to Stand On: ‘Offended Observers’ and the Ten Commandments,” written in conjunction with a senior counsel for the Alliance Defense Fund (now Alliance Defending Freedom), an organization that the Southern Poverty Law Center has designated a hate group. In it, Rushing argued that “offended observers” should never be allowed a day in court to challenge government actions that violate the Establishment Clause, leaving citizens completely unable to hold the government accountable even for some clear constitutional violations.

Rushing’s article is openly hostile to those she pejoratively labeled “village secularists” who had “eggshell sensitivities” because they were offended by large religious monuments on government land.

It is clear, the secular organizations’ letter contends, that Rushing cannot be trusted to give secularists a fair hearing in any Establishment Clause case, noting similar instances when Rushing has labelled plaintiffs whom she disfavors as merely “offended.”

A letter signed by the Freedom From Religion Foundation, the Secular Coalition of America, the Center For Inquiry, and American Atheists; and addressed to Chairman Grassley and Senate Judiciary Committee Members, notes that “Rushing has demonstrated a hostility towards secular Americans,” and that “Rushing reverse engineers results that privilege religion and violate the Constitution.”

As for Rushing’s virulent anti-gay stance, Sharon McGowan, Legal Director and Chief Strategy Officer of Lambda Legal, notes that Rushing has demonstrated a commitment to “recriminalize homosexuality and sterilize the transgender community.”

Throughout her brief legal career, Allison Rushing has supported and closely associated herself with one of the most extreme anti-LGBT organizations operating in this country today, the Alliance Defending Freedom. Rather than disqualifying her from consideration, this aspect of her record seems to have made up for all of the other deficiencies in her record, including her inexperience and he lack of any connection to the state in which she will sit.

Despite her denunciation of the Supreme Court’s marriage equality decision in United States v. Windsor, and her commitment to ADF’s mission to recriminalize homosexuality and sterilize the transgender community, all 53 Republican Senators voted to confirm her.  Today is a very difficult and disappointing day for the roughly 1 million LGBT people who live in the states covered by the Fourth Circuit, and for all people who care about courts that can treat all people with dignity and fairness.

Bottom line: In a party-line vote Republicans confirmed Allison Rushing, President Trump’s nominee to the U.S. Court of Appeals for the Fourth Circuit and a dangerous religious extremist who rejects the separation of church and state and has expressed a commitment to “recriminalize homosexuality and sterilize the transgender community.” 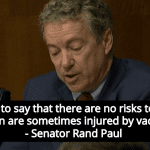 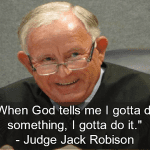 March 6, 2019 Texas Judge Disciplined After Telling Jury God Said Sex Trafficker Was Innocent
Recent Comments
0 | Leave a Comment
"they shud not rebel agin their master"
Joe Biggs Conservative Christians Reject Science, Ignore Holiday ..."
"god is foremost scientist"
Joe Biggs Conservative Christians Reject Science, Ignore Holiday ..."
"Stop placing your children under the care of the Catholic (or any other) church!!"
kaydenpat NY State Sues Buffalo Diocese For ..."
"If there's anything I've learned about Catholicism, it's that they'll always decide that something which ..."
Astrin Ymris California Bishop Urges Catholics To Reject ..."
Browse Our Archives
get the latest from
Progressive Secular Humanist
Sign up for our newsletter
POPULAR AT PATHEOS Nonreligious
1