Georgia lawmaker Dar’shun Kendrick is proposing a new “Testicular Bill Of Rights.” The new legislation would force men “to obtain permission from their sexual partner before obtaining a prescription for Viagra,” among other things.

Georgia state Rep. Dar’shun Kendrick’s “Testicular Bill Of Rights” would require men to get approval from their partner before obtaining erectile dysfunction medication, bans vasectomies, and would consider it aggravated assault if a man had sex without using a condom.

Ggggooooodddd morning! Introducing my “testicular bill of rights” legislative package. You want some regulation of bodies and choice? Done! pic.twitter.com/5E8HBRSc9l

When asked about her proposed legislation, Kendrick told Rolling Stone:

Kendrick is spearheading the legislation, which she admits has little hope of ever passing the Georgia House of Representatives, to highlight the absurdity of HB 481, a bill that similarly legislates women’s bodies. On Thursday, the Georgia House approved HB 481, which would outlaw most abortions once a doctor can detect a heartbeat in the womb or around six weeks — before many women even realize they might be pregnant. The controversial “heartbeat bill” passed by a vote of 93-73. The bill will now head to the Georgia State Senate and, if approved as expected, to Governor Brian Kemp’s desk.

[The bill is designed] to show how ridiculous it is that any state government should regulate what people do to their bodies. Some people are going to love it and some people are going to hate it, but at the end of the day, I am a staunch, pro-choice Democrat that was elected by 54,000 people to come down there and fight for them.  That’s what I’m doing is fighting.

Bottom line: In response to absurd anti-abortion legislation, Georgia lawmaker Dar’shun Kendrick is proposing equally absurd legislation that would force men “to obtain permission from their sexual partner before obtaining a prescription for Viagra,” among other things. 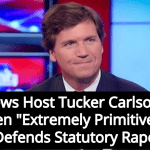 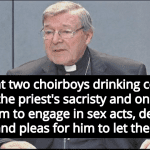 March 13, 2019 Australian Cardinal George Pell Sentenced To 6 Years For Sexually Abusing Choir Boys
Recent Comments
0 | Leave a Comment
Browse Our Archives
get the latest from
Nonreligious
Sign up for our newsletter
POPULAR AT PATHEOS Nonreligious
1